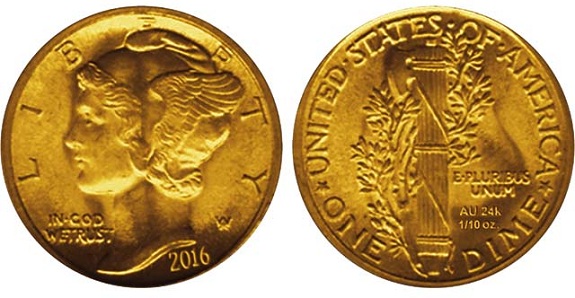 With 2015 nearing its end and 2016 right around the corner, it is time for our yearly preview of coin shows, auctions, and products that are in the works for next year. Of course, we could never give a full preview of all that’s in store, but we will do our best to give a comprehensive idea what collectors can expect for 2016.

As always, the year kicks off in high fashion with the first major show of 2016: the 61st FUN (Florida United Numismatists) winter show, which has moved to Tampa, Florida this year and will be held from January 7 to 10. Traditionally, the New York International Numismatic Convention is held the same week at the Waldorf-Astoria Hotel in New York City, with the official show dates being the same as those for the FUN show. Both shows have several auctions scheduled, with a wide variety of American and International coinage being offered at each of the venues.

The American Numismatic Association organizes two shows this year. The first is the National Money Show, held in Dallas, Texas from March 3 to March 5, marking a return to the city that last hosted an ANA show in the fall of 2012. The World’s Fair of Money moves away from the Chicago area and will be held in Anaheim, California from August 9 to August 13. This is the first time since 2012 that the largest show of the year will not be held in Rosemont, Illinois. Of course there will be many small to mid-sized local and regional shows worth attending as well.

When it comes to auctions, there will be plenty of opportunity to spend your money. The Pogue collection, of which two segments were sold in 2015, will see another three auctions in 2016. The first of these will be held on February 9 and 10; the lots can already be previewed on the Stack’s Bowers Web site. This installment includes, among other things, a fabulous collection of early copper coins, many of which are amongst the finest known survivors of their respective varieties. Additional auctions of what has been labeled the most important collection of the 21st century are scheduled for May and September 2016, with the exact dates due to be announced at a later date.

The United States Mint has also announced its first products for 2016, and some of them are set to be welcomed by many collectors. To honor the American author Samuel Clemens, better known as Mark Twain, the Mint will strike two commemorative coins, the designs of which were recently unveiled. Surcharges will benefit a number of organizations. Another commemorative due be issued in 2016 will commemorate the centennial of the National Parks Service. This program will offer collectors the chance to purchase three commemorative coins: a five dollar gold piece, a one dollar silver issue, and a copper-nickel half dollar, with surcharges benefiting the National Parks Service.

The Presidential dollar series will come to an end in 2016, at least for now, with the final three releases lined up for the coming year. Richard Nixon, Gerald Ford, and Ronald Reagan will be featured on the golden dollar. First Spouse gold coins will be released alongside the Presidential dollars, ending that series as well. The America the Beautiful quarter series will continue, with five new releases set for 2016: Shawnee National Forest (Illinois), Cumberland Gap (Kentucky), Harpers Ferry (West Virginia) Theodore Roosevelt National Park (North Dakota) and Fort Moultrie (South Carolina). 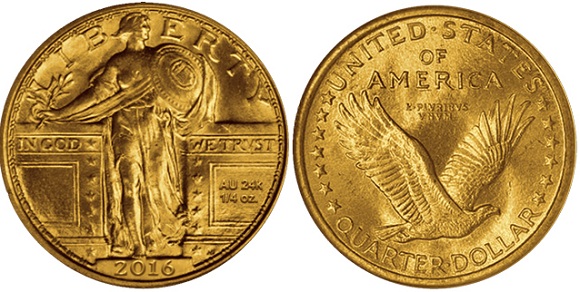 Perhaps the most exciting news announced so far surrounds the U.S. Mint’s plans to strike commemoratives to honor the iconic coins introduced in 1916—the Mercury or “Winged Head” Dime, the Standing Liberty Quarter, and the Walking Liberty Half Dollar—by striking 24-karat versions of the designs. Little detail has been revealed so far, but the dime will become a 1/10 ounce gold coin, the quarter a ¼ ounce gold coin, and the half dollar a ½ ounce gold coin. All will be dated 2016, and will show the gold content and weight on the reverse, as all American bullion coins do. Whether or not the Mint plans to strike silver versions as well remains unclear at this time.

Of course annual Mint and Proof sets will be issued, and the American Eagle bullion series will continue to be released in its various formats, giving collectors and investors the opportunity to add to their collections and numismatic portfolios. More exciting news will no doubt be announced as 2016 progresses. As always, we will cover auctions, developments, and product releases right here on Coin Update, making sure that you are among the first to hear all the numismatic news.