The U.S. Mint has begun taking orders for the 2016 Presidential $1 Coin Uncirculated Set. As there will only be three (rather than four) Presidential dollars issued in 2016, the price of the set has been reduced to $14.95, two dollars less than last year’s issue. There are no product limits or household order restrictions in place at this time.

The set contains six Uncirculated Presidential dollars, including examples of each of this year’s three designs struck at both the Philadelphia and Denver Mints. The coins feature portraits of Richard M. Nixon, Gerald R. Ford, and Ronald Reagan, the final three presidents eligible to be honored in this series. Over the course of its 10-year run, the Mint’s Presidential dollar program has featured every deceased president on 39 different issues. 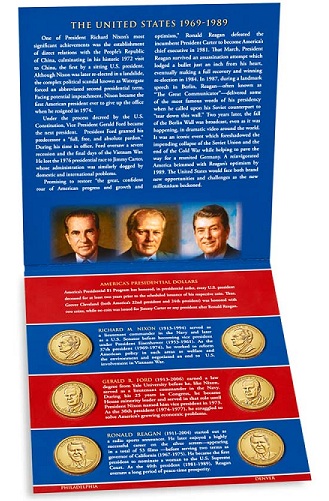 The obverses of the coins carry a portrait of a president with his name, dates in office, sequence number as an office holder, and IN GOD WE TRUST inscribed along the rim.

All issues in this series share a common reverse designed and engraved by Don Everhart, on which an image of the Statue of Liberty is placed beside the coin’s $1 denomination and UNITED STATES OF AMERICA. The year of issue, mint mark, and E PLURIBUS UNUM are included along the edges of the coins. 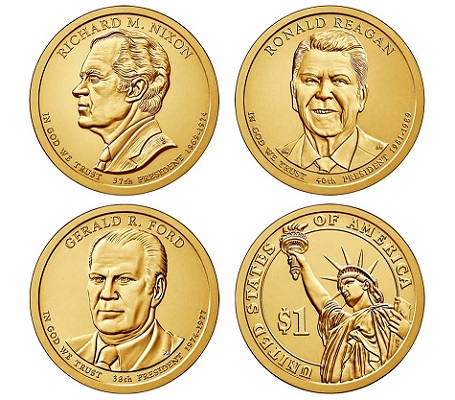 The set’s six coins come housed in a protective folder that carries portraits and biographical sketches of each president. For more information on the 2016 Presidential $1 Coin Uncirculated Set, please visit the U.S. Mint’s Web site.