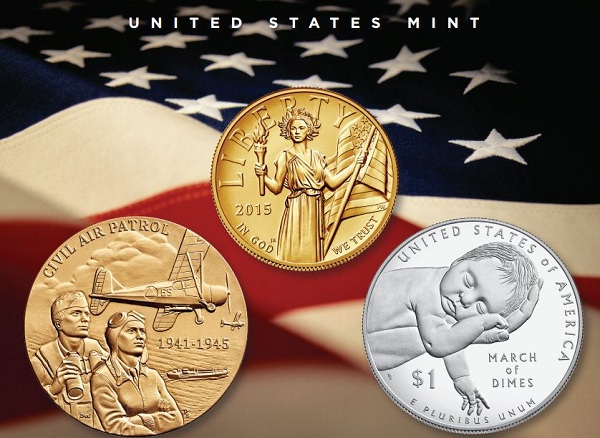 The U.S. Mint has released its annual review for 2015, presenting a summary of its activities and revenues for the fiscal year beginning on October 1, 2014 and concluding on September 30, 2015. The report shows that the Mint increased profitability in 2015, despite experiencing a drop in sales of numismatic products. Robust bullion sales countered this setback, however, as did increased revenue from circulating coin sales to the U.S. Treasury.

Revenue generated by the Mint’s numismatic sales dropped 10.2% in 2015 to $453.2 million. The total number of units sold declined as well, dropping 6% to 5.4 million. In his introduction to the annual report, Principal Deputy Director Rhett Jeppson presented a theory on why this occurred, writing, “we believe the decline in revenue and unit sales is primarily driven by the absence of some of last year’s most popular products, such as the Baseball Hall of Fame Commemorative Coins, and the shrinking customer base of numismatic hobbyists.” Earnings on numismatic sales still managed to grow, however, mainly due to an increase in profits from Silver Eagle programs.

Demand for bullion coins saw no such decline; in fact, the 2015 fiscal year was the best ever for the Mint’s bullion program. Overall revenue for investor coins rose 17.2% to $2.1 billion last year, while net income rose 117.9% to $61 million. Gold and Silver bullion sales totaled 49.7 million ounces, 10 million more than in 2014. This discrepancy was due mainly to record-breaking sales for American Eagle Silver bullion coins in the 2015 fiscal year, totaling 47,870,000 ounces.

Circulating coin production hit 16.2 billion coins last year, the most since 2006. The Mint also doubled 2014’s seigniorage total, which considers profits created by keeping production costs for a currency below face value. This allowed the Mint to return $550 million to the Treasury General Fund.

Regarding production costs for circulation coinage, an interesting statistic surfaced concerning Lincoln cents and Jefferson nickels. Both issues have drawn a lot of press for costing more to make than the subsequent values of their denominations, but the Mint has actually made strides toward closing this gap in recent years.

The production and distribution cost for the Lincoln cent is now down to 1.25 cents per coin (from 1.43 cents last year), while the cost of minting a nickel dropped from 6.9 cents to 6.6. Dimes and quarters are getting cheaper to make as well, and their costs remain comfortably beneath the value of their respective denominations. Production and distributions costs for circulating coins are listed on the chart below, provided by the U.S. Mint. 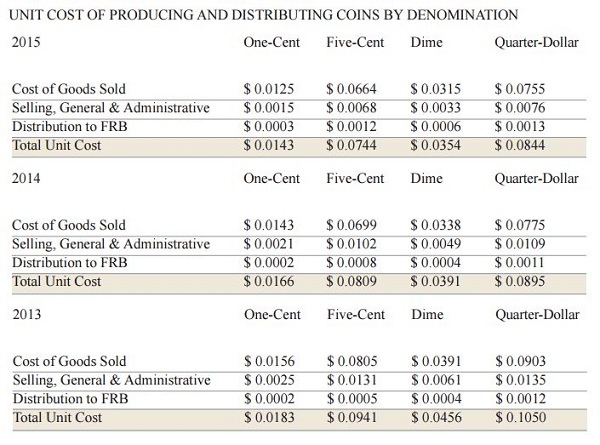 The full 2015 Annual report runs 68 pages long and contains a wealth of fascinating information for anyone interested in combing through it. The complete document can be accessed here.