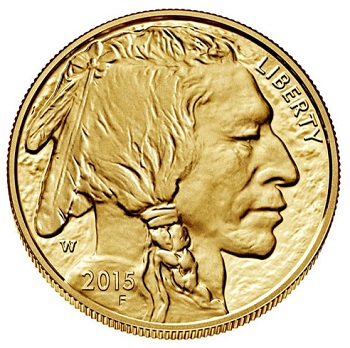 The 2015 American Buffalo One Ounce Gold Proof Coin is now sold out, after spending months in “Unavailable” status on the U.S. Mint’s Web site. Barring any last-minute adjustments by the Mint, the final sales total for the coin will stand at 16,592 units, which is the lowest mintage of any American Buffalo one-ounce gold Proof coin. Over 2,000 pieces now separate it from the 2013 issue, which holds the second-lowest mintage at 18,594.

Sales of the 2015 Gold Buffalo Proof Coin were kept relatively low by a variety of factors. It got off to a modest start in April of last year, selling 5,497 units during its first week of availability, and never saw huge demand in subsequent months. Then, perhaps more importantly, supply issues came into play: the coin became “Currently Unavailable” on the Mint’s Web site on November 24, at which time it had already sold 15,937 units, or 96% of its final mintage.

After that, small batches of the coin were issued in fits and starts, but all sales were finished by February 10 of this year, which was the last day the Mint posted an adjustment to the item’s sales figure.

The new 2016 Gold Buffalo Proof Coin launched last Thursday, March 31, and is unlikely to have its mintage kept so low by insufficient supply. As noted on this week’s U.S. Mint Sales Report, the item reached 12,001 sales in less than a week.

American Buffalo One-Ounce Gold Proof Coins have been issued every year since their debut in 2006. They feature the classic 1913 Type 1 Buffalo Nickel obverse and reverse designs created James Earle Fraser.