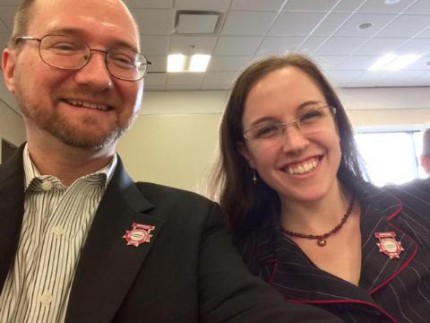 August means American Numismatic Association! On Tuesday Whitman Senior Associate Editor Caitlyn Trautwein and I donned our Official Red Book Contributor lapel pins and boarded a late-morning flight from Atlanta to Chicago. It’s a nice plane ride, not too long in the air, but offering enough time to dig into the hobby periodicals and review our upcoming schedules. 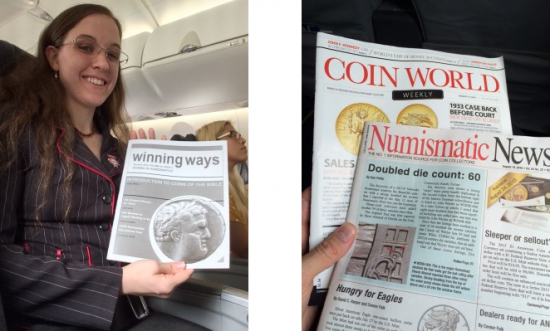 Caitlyn and the latest issue of Winning Ways, the journal of Women In Numismatics. (Visit them at www.WomenInNumismatics.com.) (left); Catching up on the weekly trade papers during the flight to Chicago (right).

Whitman Expo General Manager Lori Kraft was kind enough to pick us up at the airport and chauffeur us to our hotel. If you see Lori at the Whitman booth or on the bourse, give her a salute for braving Chicago’s lunch-hour traffic. She’s fearless. (The daily commute in Atlanta has seasoned her into a traffic-weaving pro.) 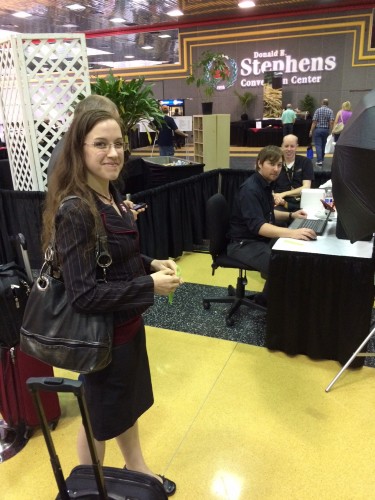 Caitlyn checking in with the friendly and helpful American Numismatic Association registration crew.

Dealer registration at the Stephens Convention Center was a breeze, thanks to the friendly ANA folks at the front desk. On the way into the hall I introduced Caitlyn to longtime Red Book contributor and numismatic legend Ron Gillio and we chatted for a moment before heading to the floor. 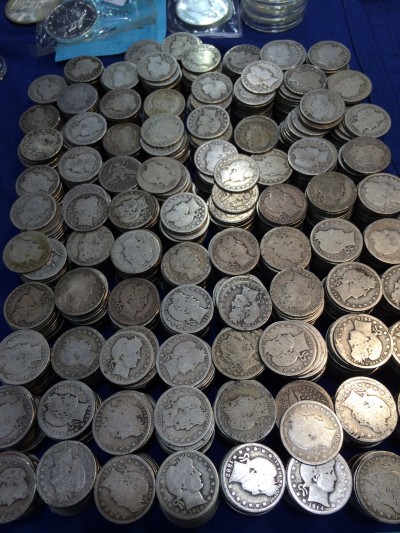 Stacks of Barber coins — the workhorses of early-1900s American commerce.

Melissa Karstedt and Larry Stack were at the Stack’s Bowers Galleries megaplex at the front of the bourse. We talked about their upcoming auctions, including a very impressive collection of Chinese coins and paper. It’s always a pleasure to get their unique perspective on the hobby.

This is Caitlyn’s first World’s Fair of Money, and it was fun to show her around the bourse, which is quite a bit bigger than the average coin show. 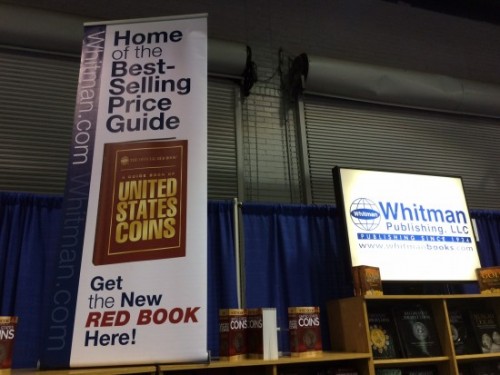 We stopped at the Whitman booth to say hello to Lori, Michelle, and Tabitha, who’d done a great job setting up our displays of books, folders, albums, maps, and hobby supplies. “Mega Red” is there — that’s the massive new Deluxe Edition of the Red Book — in case you’re looking for a weight-lifting challenge that also exercises the ol’ brainpan. Six-and-a-half pounds of coin-collecting information at less than 50 cents per ounce. It’s like getting a brick of gold for the price of copper. Ask for the special show rate on forklifts and back braces.

We found Mary Sauvain, another celebrated Red Book pricing contributor, hunting on the bourse for copper, silver, and gold coins for some clients — working her numismagic even though she’s “officially retired” from the business. We chatted for a while, swapping stories of some great (lucky) finds. 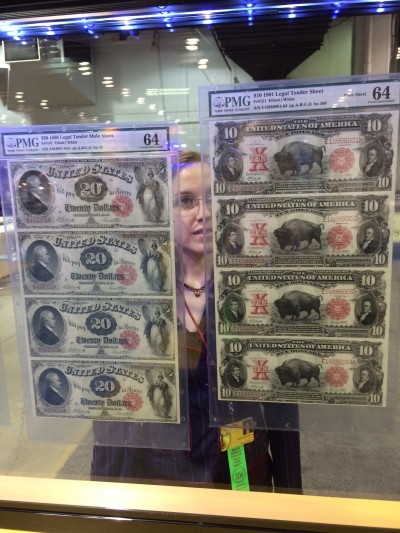 Caitlyn is the editorial project manager for Q. David Bowers’s Whitman Encyclopedia of Obsolete Paper Money, and she’s drawn to paper currency like a moth to a flame, so we headed toward the back of the bourse, where several tall dealer’s signs beckoned. (The signs were tall, not necessarily the dealers.) On the way we stopped to talk with numismatic rare-book dealer David Fanning, who had some interesting old coppers at his table in addition to the usual astounding collection of bookish delicacies. Literature dealer Charles Davis was there, as well, but he was busy with a customer, so we’ll stop to see him tomorrow.

One of the great things about the ANA show is you can’t walk 20 feet without seeing an old friend — or a young friend, in the case of Harvard student John Bowers, recently returned from a teaching trip to China. John and I have accompanied his grandfather, Dave Bowers, on numismatic research projects in the past. It was nice to catch up before continuing our slightly meandering beeline to the paper-money treasures in the back of the hall. 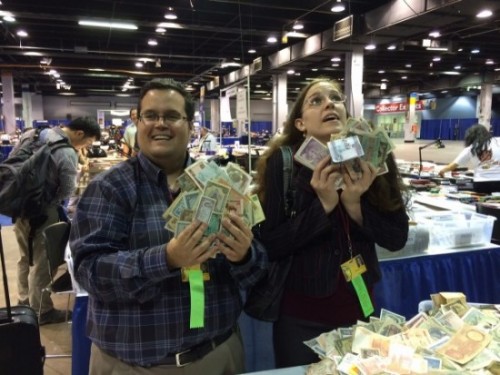 Jeff Starck and Caitlyn Trautwein: The richest people in the world — in demonetized foreign paper money.

While we were browsing through a pile of world paper notes, Coin World reporter Jeff Starck showed up and we shot the breeze for a while. I highly recommend Jeff’s excellent “News & Analysis” coverage of Germany’s proposed cultural-property laws in the August 17, 2015, issue. Their implications reach much further than coins, and Jeff did a great job making sense of it all. The conversation wasn’t all serious, of course — not when we were surrounded by paper money, medals, and coins, like kids in a candy shop. There’s something infectious about the enthusiasm of collectors at an ANA show.

Back at the Whitman booth we ran into collector Glen Marhefka, who showed us what has to be one of the most unique Red Books in existence. It’s a copy of the 1987 Milwaukee edition that was signed by R.S. Yeoman and other numismatic luminaries at the ANA convention banquet in 1986. (The first Red Book was published in November 1946 and was given a cover date of 1947, which explains why the book is always “a year ahead.”) I felt honored to add my autograph, at Glen’s request, to go alongside the likes of Ken Bressett, Bill Fivaz, Dave Bowers,Scott Travers, U.S. Treasurer Katherine Ortega, and many others. Caitlyn and I both signed the book, bringing its autographs to a total of 167! Glen showed his chops as a true collector: he keeps a detailed logbook with meticulous notes about every signature. Makes me want to start taking a Red Book around the bourse for famous numismatists to autograph. 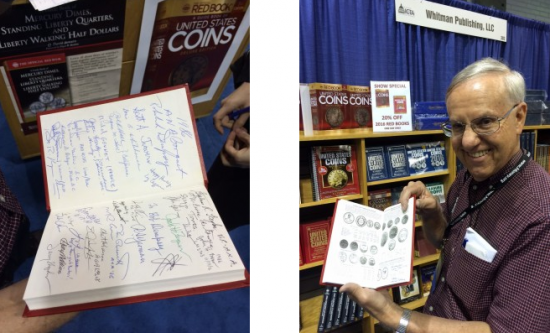 I also talked with Pete Smith about his in-the-works book project on the Philadelphia Mint’s 1792 coinage, coauthored with Len Augsburger and Joel Orosz and to be published by Heritage. Hats off to this talented trio; they’re doing impressive research into the early history of our nation’s coinage. I also chatted with Scott Rubin, who studies numismatic auction records with a keen eye and always shares his detailed research in the Red Book’s annual “Top 250 U.S. Coin Auctions” list. Caitlyn and I discussed the Whitman Encyclopedia of Obsolete Paper Money with two Illinois specialists, Rob and Dale, who are looking forward to the volume that covers the Land of Lincoln. It’s amazing and very encouraging how generous collectors are with sharing their knowledge. I also caught up with Jill Kimball of Littleton Coin Company and she told me about some of the interesting goings-on at the famous New Hampshire firm. How cool is it to work for a company where David Sundman stops by the employee lounge and gives an impromptu presentation on his latest numismatic research? 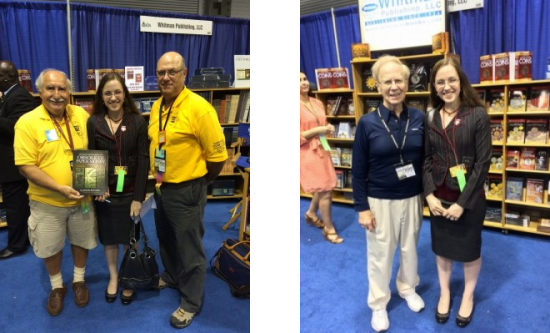 Dinner was at a nearby steakhouse with Ken Bressett and the rest of the Whitman crew. It was a lively meal, with conversation ranging from the American Arts gold medallions to ancient Korean coins to the finer points of Southern cuisine. If you’re reading this on Wednesday, stop by the Whitman booth for a chance to meet Ken, Dave Bowers, or Beth Deisher. It’s not every day you get to meet hobby legends, and the nice part is they all love to talk with collectors, share their experiences, and answer questions. It’s all about learning and having fun.