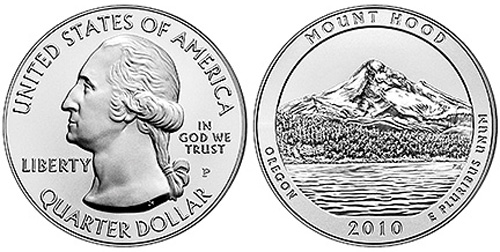 The reverse design of the coin features a view of Mount Hood with Lost Lake in the foreground. Inscriptions read “Mount Hood”, “Oregon”, “2010”, and “E Pluribus Unum”. The obverse design features a portrait of George Washington by John Flanagan and inscriptions “United States of America”, “Liberty”, “In God We Trust”, the nominal face value “Quarter Dollar”, and the “P” mint mark, which is used for numismatic versions of the series. The edge of each coin includes the incused inscription “.999 fine silver 5.0 ounce”.

The Mount Hood Five Ounce Silver Uncirculated Coin has a mintage of 27,000 pieces. This is the same level as the previous four 2010-dated numismatic releases of the series. Pricing is set at $279.95 per coin, and an ordering limit of one per household will be in place for the start of sales.

Coins are packaged in a protective capsule with an outer box and certificate of authenticity signed by the Acting Director of the United States Mint.