On October 1, 2009, sales of the 2009 Mint Uncirculated Coin Set began at the US Mint. This set contains 36 different coins produced at the Philadelphia and Denver Mints. One of the highlights of the set is the four different 2009 Lincoln Cents, which are struck witha composition of 95% copper, 3% zinc, and 2% tin, which was used for the first Lincoln Cents issued in 1909. 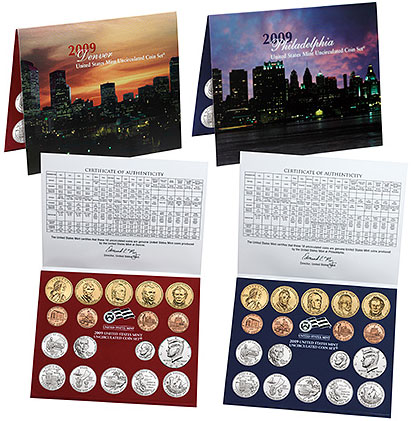 The 36 coins included in the 2009 Mint Set are packaged in two separate folders, one containing 18 coins from the Philadelphia Mint and one containing 18 coins from the Denver Mint. All coins are struck with a special satin-finish. The United States Mint strucks the coins on special presses using greater force than circulating coins, which produced a sharp and intricately detailed image.

The sets are priced at $27.95 each, and offered without an ordering limit. The price has been increased by $5 compared to last year’s set due to the greater number of coins included.

The following coins are contained in each set: