For short while, I refused to send any of my coins to Numismatic Guaranty Corporation because I disliked certain aspects of its service, which I have forgiven over time, as it truly is either the best or second-best third-party grader in the business, with many preferring Professional Coin Grading Service. 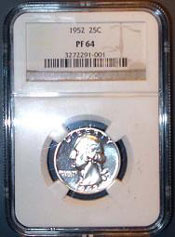 Both have more positives than negatives, and I send raw coins to each. But recently those negative NGC feelings were rekindled when it returned this 1952 Superbird variety with a plain proof label.

I wanted the attribution for two reasons, one personal and the other numismatic. I found the coin in an online auction and purchased it for $12, quite a bargain, as this variety in near gem mint state sells for about $75.

The “Superbird” appears on the reverse of the coin. What appears to be an “S” is engraved on the eagle’s breast, reminiscent of the Superman comic superhero’s costume. The symbolism is apt on the magnificent bird of prey representing the United States.

More important, it is assigned FS-1952-3 in The Cherrypickers’ Guide to Rare Die Varieties.

Like the low- and high-leaf 2004-D Wisconsin State Quarter, the Superbird symbol may have been a deliberate engraving on a die, adding to the variety’s allure.

I learned the hard way sending varieties to NGC, making sure to designate the specific attribute before submitting. Last year I had to crack open and resend a 1971-D double die Kennedy half dollar because I neglected to attribute the coin FS-102. Same thing happened with a filled-die “no FG initials” 1982 Kennedy half that I also sent in at the time.

I submit through a local dealer, so I had to pay an extra $50 to holder those two coins for my NGC set. 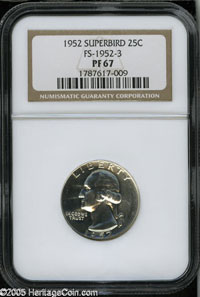 This time, to be sure, I even checked the Heritage Auction Gallery databank for the correct attribution and found this press release, citing an NGC director stating his company “is already accepting and attributing this variety and will use the ‘Superbird’ moniker on its label.”

Imagine my surprise when the coin was returned without the attribution.

My coin dealer telephoned NGC and complained, noting that he, too, had seen the NGC designation on the variety in the Heritage Auction archives. The dealer told me that NGC informed him it no longer was designating “Superbird” and would not refund payment (but would reimburse for the cost of shipping).

I lost $25. Add to that another $25 submitting to PCGS, and my online “find” suddenly was not the bargain it once seemed.

I still send coins to NGC because I admire much of what it does for collectors and the hobby. However, I wish that my all-American superhero eagle was holdered and labeled for my NGC quarter-dollar set.

Bottom line? If a third-party company holders a coin with a specific designation, it should continue to do so for collectors building sets with the company’s labels.