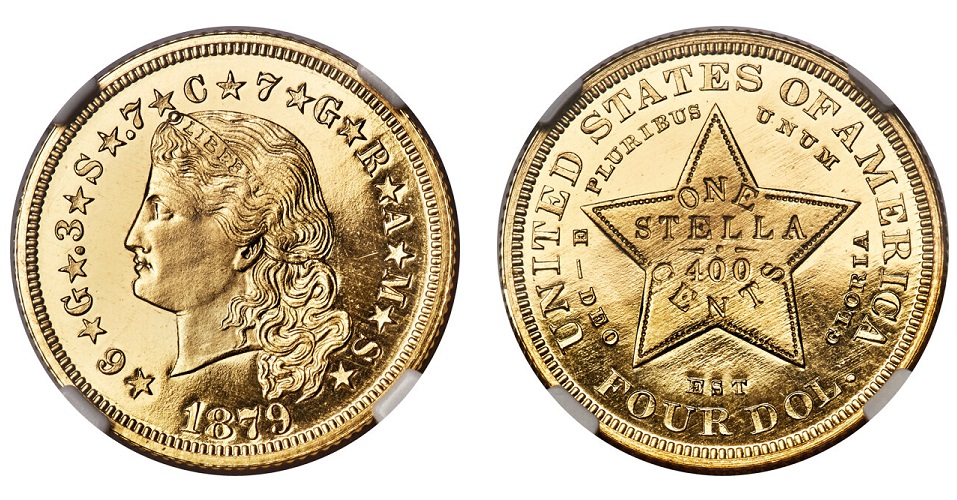 More than 2,100 bidders swarmed to the event, which generated perfect sell-through rates of 100% by value and by lots sold.

The magnificent 1879 Flowing Hair Stella, Judd-1635, Pollock-1833, JD-1, R.3, PR-66 Ultra Cameo NGC at the top of the sale is in exceptionally high demand. These four dollar gold patterns have long been included in sets alongside regular-issue coinage, and is the only pattern issue with its own section in the annual Guide Book, between the three-dollar gold piece and half eagle, each of which, unlike the Stella, actually circulated.

“The Flowing Hair Stella is one of the most important and popular coins in American numismatics,” Heritage Auctions President Greg Rohan said. “This is a magnificent example of a must-have coin that will be a centerpiece of any serious collection.”

An 1863 dollar MS-67 NGC. OC-1, Low R.3 from the collection of Hall of Fame former Major League Baseball star Andre Dawson and tied for the finest certified specimen, prompted nearly 30 bids before it finished at $114,000. Acknowledged as one of the most memorable Seated Liberty dollars ever offered through Heritage Auctions, it is one of just a few dozen mint state examples of this elusive Civil War-era issue known to have survived from a business strike mintage of 27,200 pieces. Just one other specimen has been certified MS-67 by NGC, while PCGS has graded just one.

From the first year of gold coinage, a 1795 Small Eagle, BD-4, R.5, MS-61 PCGS rode three dozen bids before closing at $90,000. The U.S. Mint struck gold coinage for the first time in 1795, delivering 744 Capped Bust Right half eagles July 31. Production continued through September 16 that year, resulting in a total of 8,707 pieces. Coinage of half eagles then was halted for the year and production of eagles began. This coin is one of 27 examples graded MS-61.

A 1797 dollar 10×6 Stars, Large Letters, B-3, BB-71, R.2, MS-63 NGC climbed to $78,000 when the last of 25 bids came in. Heritage Auctions experts believe this dollar ranks among the two or three finest known coins. The typical 1797 B-3 dollar is apt to be found in EF or lower grades, although several have been called Uncirculated over the years.

A 1934-S dollar MS-66+ PCGS. CAC, the finest ever to come through Heritage Auctions, reached $63,000. Just over one million of the 1934-S Peace dollars were struck, putting them among the lowest-mintage issues in the set and key dates. It retains a reputation for being among the most elusive issue in the series, the rarest entry in the set, up through grades as high as MS-64. The PCGS Population Report shows most Uncirculated examples of the 1934-S in a tight range of MS-62 to MS-64; there are only a couple hundred submissions at that service in MS-65, and this is one of 42 Premium Gems reported. Further, it is one of just eight MS-66 representatives at PCGS with an added Plus designation — with none finer.

Other top lots included, but were not limited to: