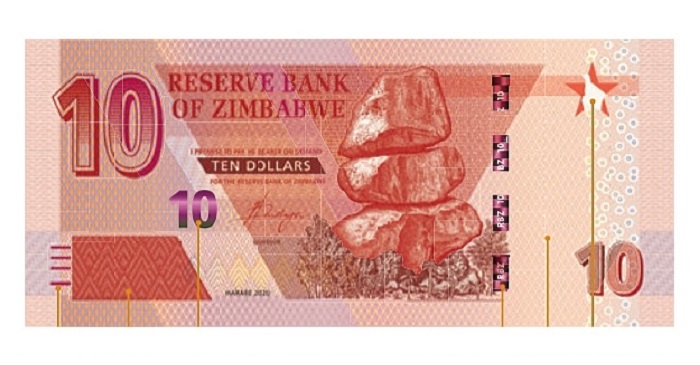 The Reserve Bank of Zimbabwe has announced (14th May) it will be releasing larger value banknotes into circulation. The release of the ZWL $10 denomination will commence from the date of the announcement, and the issue of the ZWL $20 denomination is scheduled to enter circulation from the first week of June 2020. The new $10 and $20 denominations will circulate alongside smaller value notes of $2 and $5, which were introduced late last year and replaced so-called “bond notes” of the same design and face value at an equal exchange rate.

After one of the world’s highest levels of inflation ever recorded, the country finally abandoned its national currency. A year later, they introduced a structure of payments based on a basket of foreign currencies but predominantly based on the U.S. dollar. To alleviate the chronic shortage of currency in circulation and to prop up a fragile economy, a system of bond notes and coins were gradually introduced. In February 2019, and with immediate effect, the Reserve Bank declared that bond notes and all electronic payments would be merged into a new currency which they referred to as the Real Time Gross Settlement (RTGS) dollar. 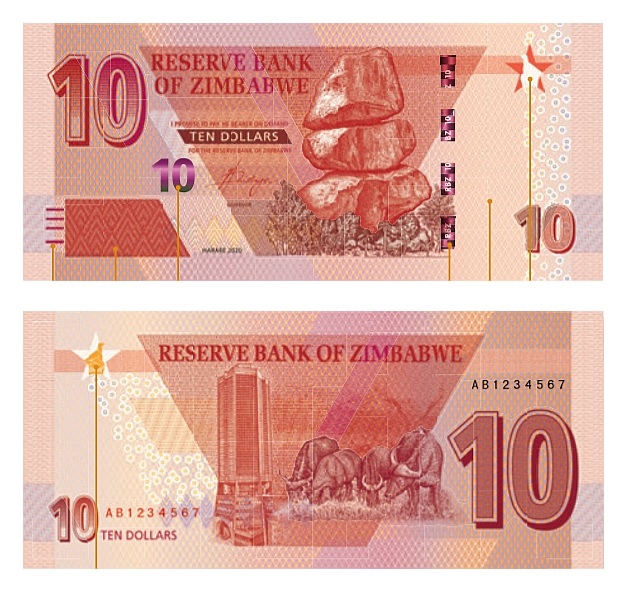 However, with the introduction of this “standalone” currency in November, high levels of inflation have been experienced in the country once again. Year on year, levels of price increases are now at 676%. At the current RBZ exchange rate of 25 new Zimbabwean dollars (ZML) to the U.S. dollar, the new $10 notes have a value of U.S. $0.40. 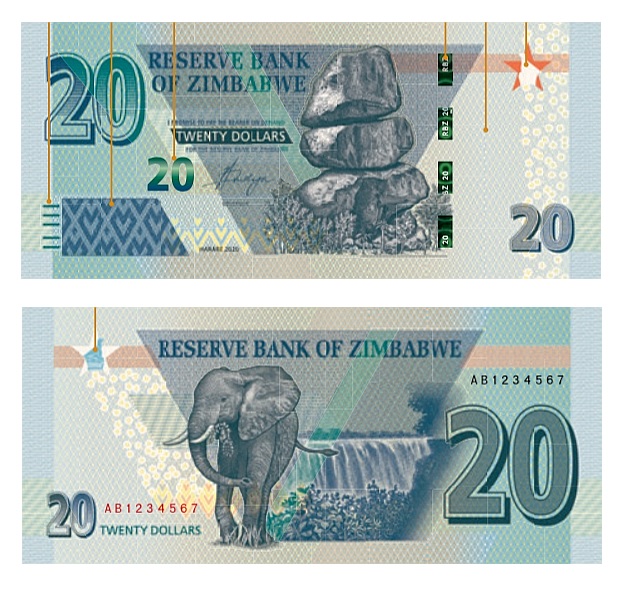 Security features include for both denominations:

Tactile print: This tactile print feature identifies the denomination in a series of lines added to aid visually impaired persons.

Latent image: The numeral of the notes’ value is seen when the note is tilted under a light source.

Optical variable ink application: The note’s value is shown with a colour shifting process and changes from magenta to green on the $10 note and green to azur on the $20 note.

Holographic security thread: This vertical strip appears segmented and solid when held up to a light source and includes see-thru micro-lettering of RBZ 10 and RBZ 20.

Aligned print application: A perfect registry of Zimbabwe’s National Bird is printed on both face and back, when held up to a light source, the bird is able to be recognised in perfect register.

The banknotes are expected to be in physical use from the 18th May when commercial banks will have ample supply for distribution. For additional information on the currency of Zimbabwe, please visit the website of the Reserve Bank of Zimbabwe.