Earlier this month, the Reserve Bank of Zimbabwe unveiled a series of small denomination coins which they hope will alleviate the shortage of change that has been prevalent since the country adopted the US Dollar as legal tender in late 2009 following the collapse of their own Dollar due to unprecedented levels of hyper-inflation.

The coins, referred to as “Bond coins” are produced in denominations of 1, 5, 10 and 25 cent values with a fifty cent coin expected to be released into circulation in mid-2015. The coins are supposedly backed by a “Bond” from which they derive their name from – with a US$50 million bond coin facility that the Reserve Bank claim they have arranged for the purpose of providing the coins with intrinsic value. The need for the coins were two-fold, first, due to the chronic shortage of coins and prompting businesses and shopkeepers to give out pieces of candy as change or to round up or down to the nearest Dollar; and two, as a deal with the US treasury to transport a substantial value of US coins to the sanction-ridden country fell through, the Reserve Bank decided to produce their own coins. Commissioned from the South African Mint, the coins are expected to make up about 2% of the Southern African economy – which has seen its GDP decreasing year for year for at least the last two decades. 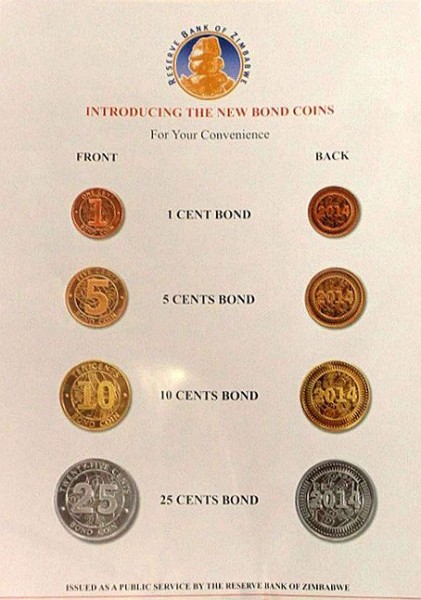 The initial amount of Bond coins to be made available will be US$10 million which is scheduled to be released into general circulation between December and March 2015.

Under normal circumstances, the proportion of coins to money in circulation in an economy is between 20 to 25% but with the initial release of the Bond coins during this time-frame, the overall percentage of coins is expected to equal about 2%. As Zimbabwe is in reality a Dollarized economy, the country in practice uses an array of currencies such as the British pound, South African rand, Botswana pula, Japanese yen, Chinese yuan, Indian rupee and the Euro. With an increased level of the Bond coins entering circulation, it is expected that the ratio of coins to banknotes will increase to just under below 10% of total bank deposits.

Zimbabwe’s level of inflation at its height reached a staggering 231 million percent in 2008, before the government and Reserve Bank stopped tabulating the statistics. When asked by the media if these coins were the first step to re-introducing a new Zimbabwean currency, the Governor reiterated, “We can never be so careless to bring back the local currency,” further stipulating “We have no appetite to do so, and we can’t be careless to do so and we won’t do that.”

As the Zimbabwean Dollar seemed closer to collapse in 2007, the Reserve Bank resorted to the issuance of “Bearer Cheques” with expiration dates after which the note no longer had value. The Reserve Bank went so far as introducing the world’s largest ever banknote denomination of One Hundred Trillion Dollars in 2008. The Reserve Bank later re-valued the Zimbabwean Dollar the next year by removing 14 zero’s from a new series of banknotes before they finally withdrew the national currency in favor of the US Dollar in an effort to stabilize their faltering and internationally debt-ridden economy.