Today November 24, 2009, the United States Mint held the official launch ceremony for the Zachary Taylor Presidential Dollar. The ceremony was held at Taylor Park in Orange, Virginia as part of Zachary Taylor Appreciation Day. The event took place on the 225th anniversary of the former President’s birth. 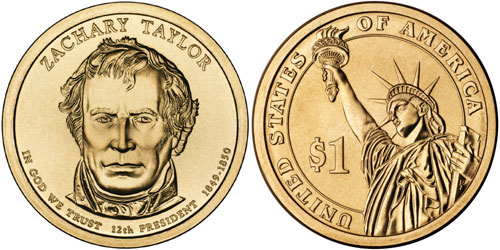 “Millions of Zachary Taylor Presidential $1 Coins will make their way into the hands of Americans who will see them and remember the life of former President Taylor and his contributions to our country,” said Andrew Brunhart, Deputy Director of the United States Mint. “We are proud to present this coin to the Nation.”

The Zachary Taylor Presidential Dollar had been previously released into circulation on November 19, 2009. On the same date, the United States Mint also began selling 25-coin rolls of the coins specially packaged for collectors. In the first three days of sales, collectors purchased 27,015 of the Philadelphia Mint rolls and 26,200 of the Denver Mint rolls.

The obverse of the Zachary Taylor Dollar features his portrait with the inscriptions “Zachary Taylor”, “In God We Trust”, “12th President”, and the years of his term “1849-1850”. The reverse of the coin features the Statue of Liberty with inscriptions “United States of America” and “$1”. The coin also includes edge lettering with the motto “E Pluribus Unum”, the date, and mint mark of the coin. Both the obverse and reverse of the coin were designed and sculpted by Don Everhart.