Over the course of 12 years, the broader series will feature different reverse designs representing a National Park or national site in each of the 50 states, 5 U.S. territories, and the District of Columbia. The obverse will feature the 1932 portrait of George Washington designed by John Flanagan. The numismatic versions of the 2010-dated coins are being released individually during 2011. 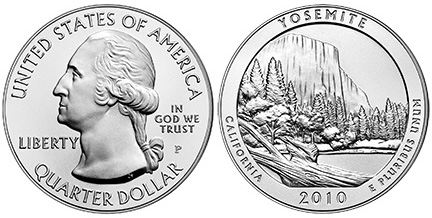 The Yosemite National Park Five Ounce Silver Uncirculated Coin features a view of the iconic El Capitan, which rises more than 3,000 feet above the valley floor and is the largest monolith of granite in the world. This was designed by Joseph Menna and sculpted by Phebe Hemphill. Each coin is struck in 5 troy ounces of .999 fine silver and has a diameter of 3 inches. The “P” mint mark representing Philadelphia is located on the obverse. Coins have a special finish created through a vapor blasting technique.

The mintage for the product is 27,000 units. An ordering limit of one per household has been established by the United States Mint and will remain in place for at least the first week of sales. Pricing is $279.95 per coin, although this is subject to potential change based on precious metals prices.

The previous two numismatic releases featuring Hot Springs National Park and Yellowstone National Park had managed to sell out within 15 days of the initial release date.