Few people will have a visual image of York County, Maine. Located in the southernmost part of the state, York County is one of the oldest counties in the United States and currently the second most populous county within Maine. Numismatists may be familiar with the county due to the 1936 York County Tercentenary Commemorative Half Dollar, the final 1936 commemorative half dollar to be discussed in this article series. Authorized by the Act of June 26, 1936 and issued by the York County Tercentenary Commemorative Coin Commission, the coin is another one in a long string of nationwide coin issues commemorating a local event.

The York Country area was initially part of the Province of Maine, which had been founded in 1622 through a patent granted to Ferdinando Gorges and John Mason by the Plymouth Council of New England. The first try at European settlement in the area was not successful; the territory of New Somersetshire, as it was called, failed due to a lack of experience and funding on both the organizers and the settlers. Next to try was Christopher Levett of York, England, who acted as an agent for Gorges and was also a member of the Plymouth Council of New England.

Levett also failed, but his tries are more significant for our story and the coin issued in the 20th century. Granted 6,000 acres of land, Levett set out to found a city named “York”, after his birth city in England. In the years 1623-1624 he explored the coast of Maine, eventually leaving behind a small number of men in a stone house. During the same time public interest increased for other English settlements in America, in particular in Virginia and Massachusetts, and interest in Levett’s expedition waned. Unsuccessful in finding sponsors and settlers, Levett returned to England, abandoning the men at the stone house, who were never heard of again. 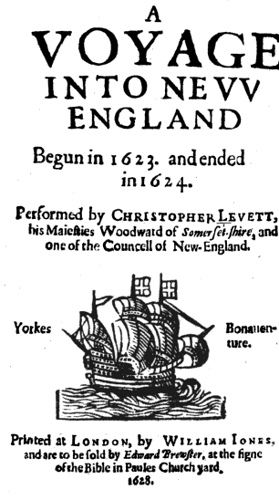 Back in England Levett published an account of his voyage. The book is a first-hand account of Maine and it’s surroundings, published shortly after the fact and is considered to be quite accurate. On the area that would later become York County Levett writes:

…there is fowl, deer, and fish enough for the taking, if men be diligent ; there be also vines, plum trees, strawberries, gooseberries and rasps, walnuts, chestnut and small nuts, of each great plenty…for the ground there is a large and goodly marsh to make meadow, higher land for pasture and corn.

Levett, also encountered Native Americans, which he considered friendly, albeit a bit unusual in their customs. Of course, this is written by a 17th century Englishman who had never traveled out of England. The Native Americans described were the Abnaki, who had called the area home for thousands of years.

Even though Levett’s tries at settlement failed the name he envisioned for his city stuck, and when a county was created in the region in 1636 it was named York County. Settlement remained sparse (a second attempt by Gorges also failed) and the region was included in the Massachusetts Bay Colony by the 1650s. Over a century later, in 1780, the county become part of the District of Maine, which in turn joined the Union as the state of Maine in 1820. While York County had gone through a number of geographical changes it was still known under the same name. 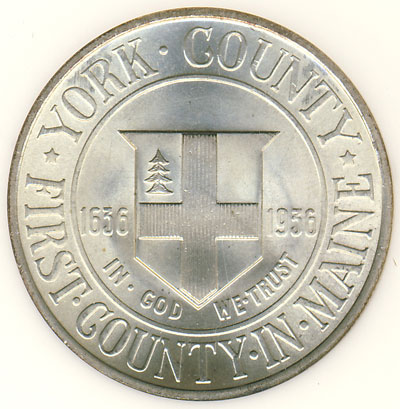 The celebrate the 1636 founding of York County, a commemorative coin was struck at the Philadelphia Mint, designed by Walter H. Rich, a local artist who specialized in watercolors. The obverse features the seal of York Country, a cross on a shield with a single pine tree in the upper left corner. Next to the shield are the dual dates 1636 and 1936. Below it is IN GOD WE TRUST. All this is again enclosed in a circle, as on the obverse, with *YORK·COUNTY* near the top and FIRST·COUNTY·IN·MAINE surrounding the lower portion of the reverse. As the coins were struck at the Philadelphia, no mintmark is found on either side. 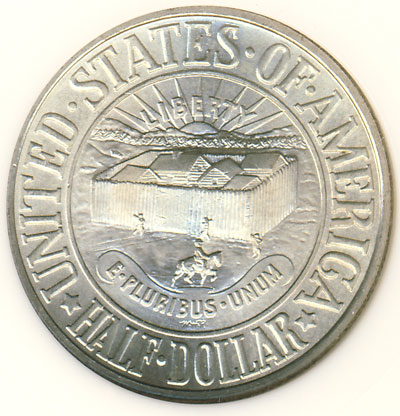 The reverse shows a representation of John Brown’s Garrison, located near present-day Saco, Maine in York County. An old fort that existed in the early 18th century, it was mostly forgotten until the 1920s, when a commemorative plaque was placed on the spot where the fort once stood by the Rebecca Emery Chapter of the Daughters of the American Revolution. No contemporary images of the fort survive, so it is an artist impression. Above the rising sun is LIBERTY, and below the fort is E·PLURIBUS ·UNUM. Around the scene are both UNITED·STATES·OF·AMERICA and *HALF·DOLLAR*. Below the letters BUS in PLURIBUS are the incuse letters W.H.P. in cursive script, the initials of the designer.

The coins were offered for sale locally at $1.50 each and $1.65 out of state, the higher price to cover postage and handling. Sales, particularly in York County, were strong and at the end of the year 18,500 coins had been sold. The remaining pieces of the 25,000 originally produced were kept on hand (instead of returning them to the Philadelphia Mint to be melted, as was common at the time) and later offered in lots of 10 or more at $1.55 each. Such lots could still be ordered as late as the 1950s, and are the primary reason why this issue is considered to be among the more available classic commemoratives.

Collectors will notice that there are only relatively small price differences between circulated coins and those grading MS66, indicating that the majority of coins were well cared for. Even pieces grading MS67, of which both PCGS and NGC have graded hundreds each are available for only a small increase over the price of MS65 graded coins. Both services have also graded a couple dozen examples in MS68, but these are harder to come by and are generally offered at auctions when specialized collections are sold.