Yellowstone National Park is the second site to be honored in the America the Beautiful Quarters series, but the first to be given the designation of “National Park”.

The area was occupied by indigenous peoples for over 11,000 years, but was not explored in an organized manner until the late 1860’s.  The park features geysers, lakes, and caves, as well as vast areas of wildlife.  Its early history as a national park was made challenging both by opposition to the impact that the designation would have to local development of the area, as well as a lack of federal funding to properly protect the park.  More recently, over a third of the park was damaged by a forest fire in 1988.

The Yellowstone National Park Quarter reverse design features an image of the famous Old Faithful geyser erupting. American Bison appear in the foreground and background of the image. The reverse was designed and sculpted by Don Everhart. 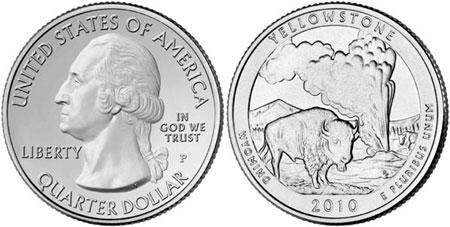 The circulation release date for the Yellowstone Quarter is June 1, 2010. The new quarters will also be available from the U.S. Mint in the following products:

A launch ceremony for the Yellowstone National Park Quarter is planned for June 3, 2010 at the Old Faithful Inn. The ceremony will be followed by a coin exchange where attendees can exchange currency for rolls of the new quarters.