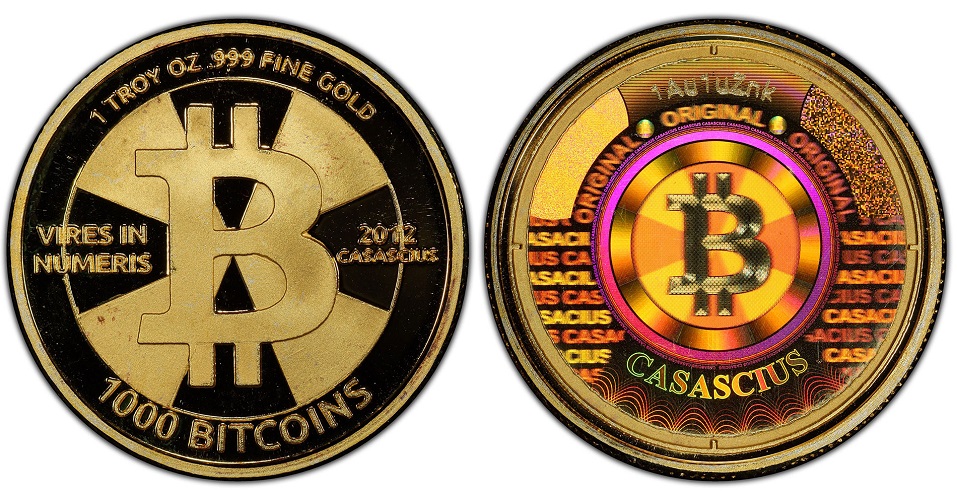 Forgotten in a desk drawer for years, this 1,000 Bitcoins denomination “Gold Cas” physical coin purchased in December 2011 for $4,905 is now worth over $48 million. Graded PCGS Proof-70 DCAM, it is the world’s most valuable numismatic item. (Photo courtesy of GreatCollections). Hover to zoom.

On behalf of its anonymous owner, GreatCollections Coin Auctions of Irvine, California, submitted the gold 1,000 Bitcoin physical coin under armed guard for certification to Professional Coin Grading Service. It has been certified PCGS PR-70DCAM.

“This is the greatest return on investment for any numismatic item, a staggering 9,786 times the purchase price in just 10 years. It may be the world’s greatest investment in that time span,” stated Ian Russell, president of GreatCollections.

“Its value eclipses classic coins, such as the 1933 Saint-Gaudens Double Eagle recently auctioned by Sotheby’s for $18,872,250 or the Sultan of Muscat 1804 Draped Bust dollar GreatCollections recently purchased at auction for $7,680,000 on behalf of a client,” he said. 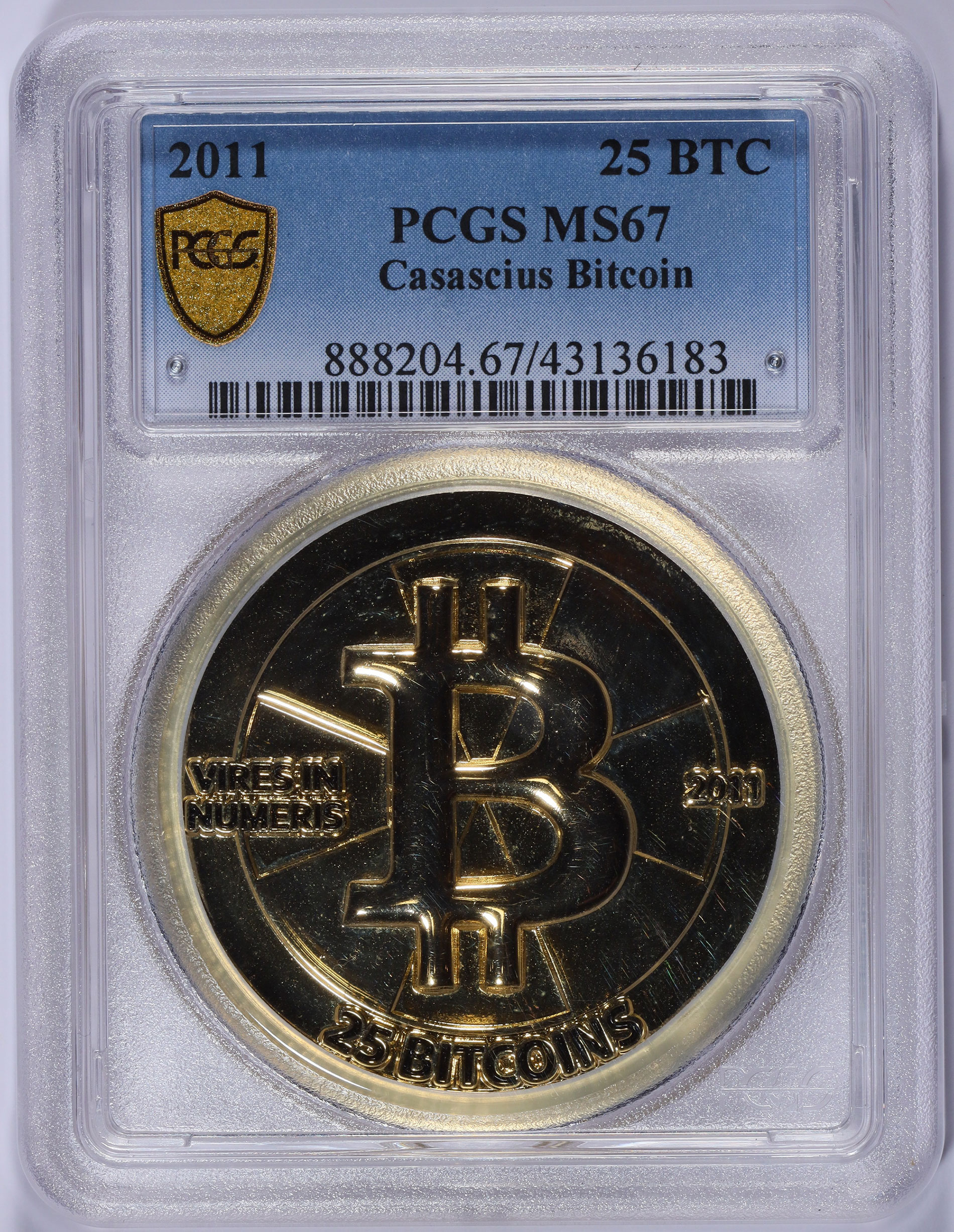 This gold-plated Casascius 25 Bitcoin, graded PCGS MS-67, will be offered without reserve by GreatCollections in an auction that closes on November 14. (Photos courtesy of GreatCollections).

The gold 1,000 BTC is not for sale, but Russell announced that a gold-plated 25 BTC coin, now certified PCGS MS-67, will be offered without reserve by GreatCollections in an auction that closes on November 14.

“Bidding will start at $1, although I anticipate this 25 BTC will sell for more than $1 million,” predicted Russell.

PCGS sets the standard for grading and authenticating rare coins, tokens, medals, and paper currency. As such, we have been entrusted with the encapsulation of the majority of auction-topping items year after year. This coin is set apart in its cultural significance in merging the worlds of cryptocurrency and traditional numismatics. Combine this with the staggering value of the Bitcoins it contains and we have a new Goliath. 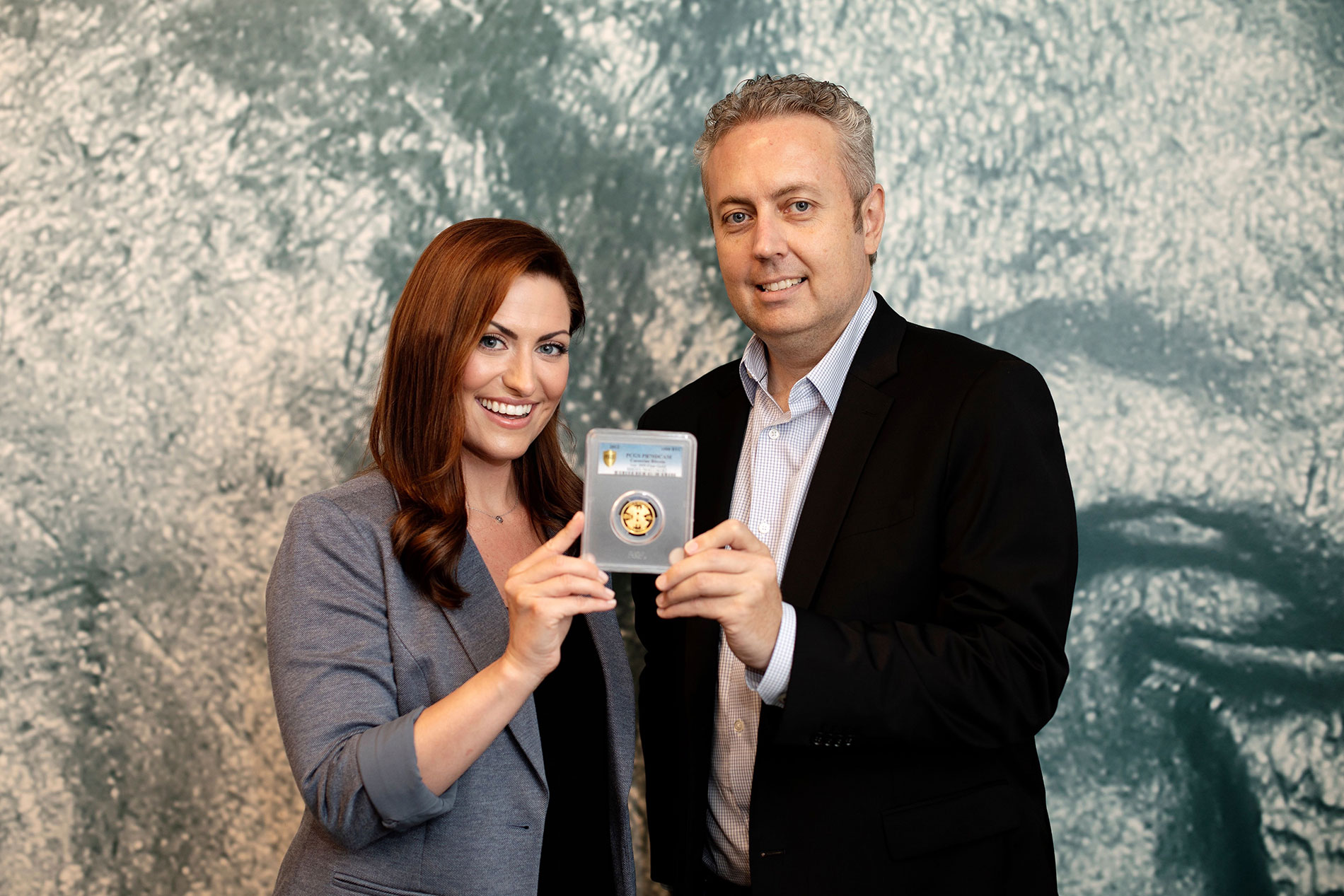 Only six 1,000 gold BTC Casascius coins were made and four of them have not been redeemed including the one owned by Russell’s client. 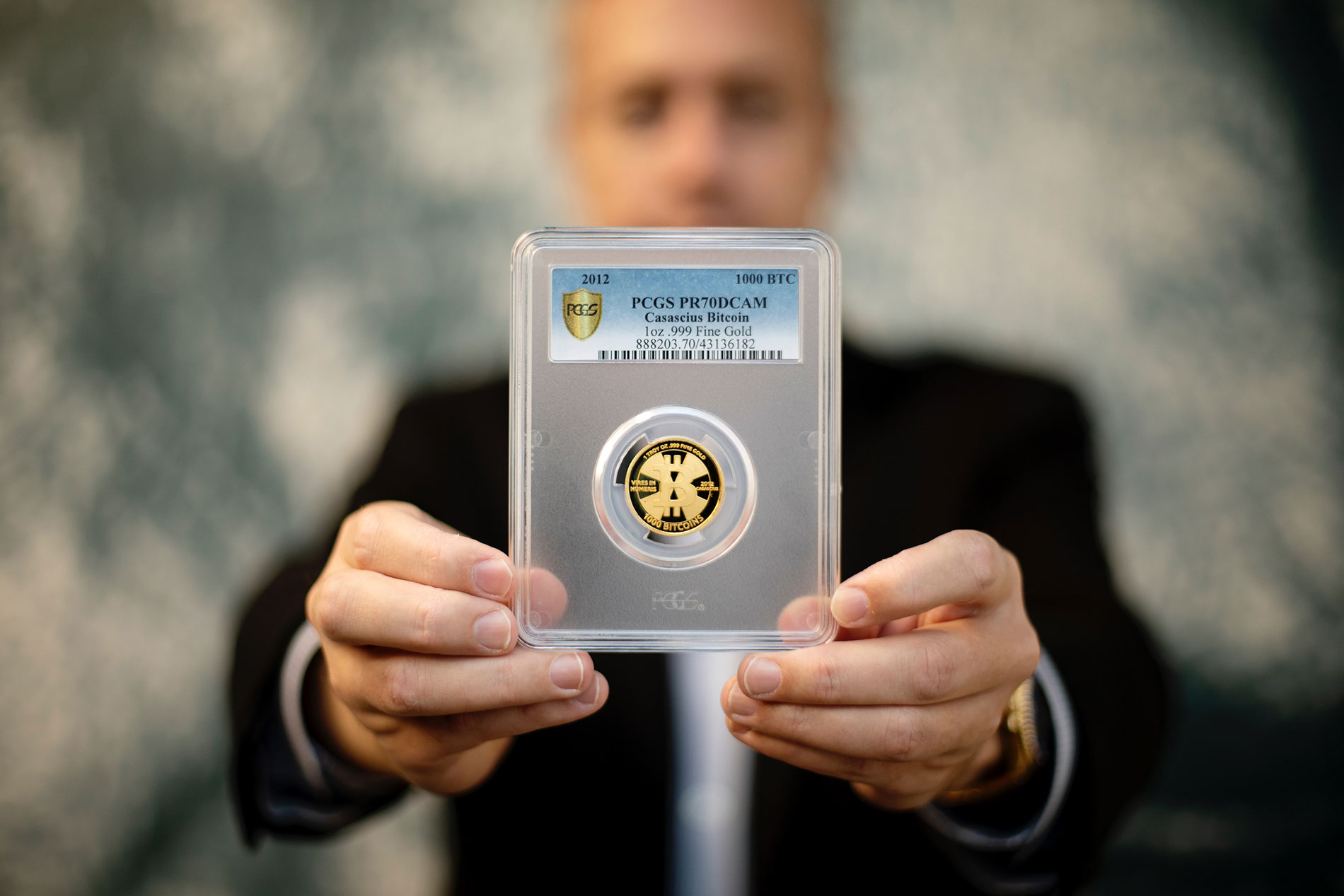 Ian Russell, president of GreatCollections in Irvine, California, holds the one-ounce gold 1,000 Bitcoins “Gold Cas” coin that is the world’s most valuable numismatic item, worth $48 million. (Photo courtesy of GreatCollections).

The gold coin is dated “2012 CASASCIUS.” The legend on the obverse includes “1 TROY OZ .999 FINE GOLD” and the motto, “VIRES IN NUMERIS,” Latin for STRENGTH IN NUMBERS. There is a multi-color, tamper-resistant hologram design on the reverse. It was in fact the first produced by Casascius.

Russell said the current owner of this 1,000 gold BTC is not the presumed founder of the digital currency Bitcoin, Satoshi Nakamoto. There have been suggestions that the founder of Bitcoin owns iconic Bitcoin items such as the “Gold Cas.”

“The Gold Cas owner wanted to have his fortune encapsulated and graded by PCGS. GreatCollections arranged the process from start to finish, including an armed guard escort to take it to PCGS headquarters in Santa Ana, California,” said Russell.

“It’s the ultimate 21st-century collectible, merging gold with crypto-currency; a cultural phenomenon considering the vast numbers of people under 30 who own some cryptocurrency as investments,” he stated.

“The $48 million coin now resides in an overseas bank vault, and it’s unlikely to ever be redeemed or spent as Bitcoin, but you may be able to see it in person someday. GreatCollections is in talks with the owner to publicly display it at an upcoming coin convention,” Russell explained.

For additional information, contact GreatCollections at 949-679-4180 or visit online.