The Government & Treasury of Niue Island have unveiled a spectacular new series of ingot coins which features some of the world’s most treasured and admired masterpieces within a format never before produced with such precision. The new “Precious Art Coin Collection” is a collaboration between The East India Company, exclusive distributors of the series, and prominent Art Galleries to capture the world’s masterpieces in precious metal coins. 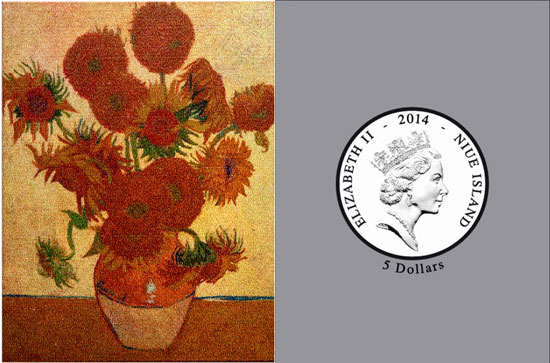 The Sunflowers coin is presented in a custom Perspex frame enabling easy viewing on both obverse and reverse. The Perspex frame is housed in a presentation box. The coin-ingot is available on the East India Company website. EIC sold almost 50% of the issue limit to international distributors but reserved 250 pieces exclusively for EIC collectors. 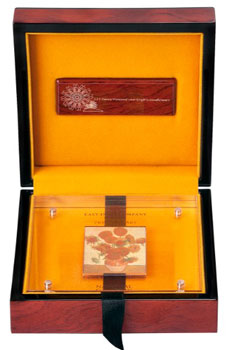 The Sunflowers coin will be followed in June 2014 with the release of the second inspired by Hans Holbein the Younger’s The Ambassadors ©1533, well known for its significant symbolism of the time, as well as the anamorphic distortion of a skull. The final coin in this year’s collection will launch in September to coincide with the National Gallery’s exhibition Rembrandt: The Finest Years on show from the 15th October 2014 to the 18th January 2015.

For more information on these coins and other items on offer from the East India Company, please visit their website at: www.eicgold.com/preciousart International orders dispatched.