In 1993, the United States Mint issued three commemorative coins to mark the 50th anniversary of America’s involvement in World War II. The $5 gold coin, silver dollar, and clad half dollar were issued individually, within various multi-coin sets, and other special products. One of the special products was the Commemorative Coin and Victory Medal Set, limited to an issuance of 50,000 units. 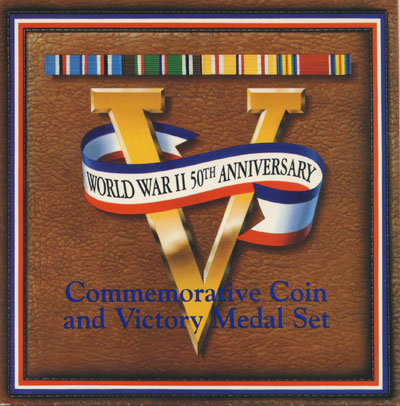 Each set included the uncirculated version of the commemorative half dollar issued for the program. The obverse design of the coin carried a depiction of the faces of three Americans from each of the branches of the armed services. A large “V” appears in the background for “Victory” while a B-17 bomber flies overhead. The reverse design of the coin shows an American soldier within a battle scene on the beach of a Pacific island. The obverse was designed by George Klauba and the reverse by Bill J. Leftwich. 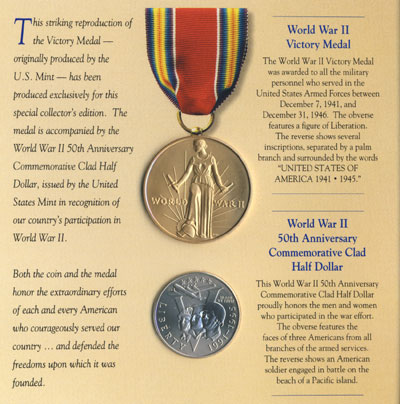 The other component of the set was a reproduction of the Victory Medal produced by the United States Mint exclusively for the set. This medal was originally awarded to all military personnel who served between December 7, 1941 and December 31, 1946. The front of the medal carries a figure of Liberation, holding a broken sword and with her foot upon a helmet. A sunburst appears in the background representing the dawn of peace. 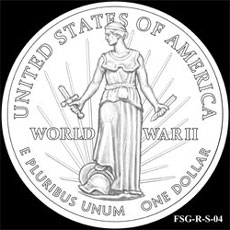 As an aside, the design for the Victory Medal was recently presented as one of the candidate designs for the reverse of the 2013 5-Star Generals Commemorative Silver Dollar. Although the Commission of Fine Arts provided their recommendation for this design, ultimately an alternate design was selected by the Secretary of the Treasury to appear on the coin. The final selected reverse design directly recognized the United States Army Command and General Staff College, which the commemorative coin was intended to recognize under the authorizing legislation.

Both the World War II Commemorative Half Dollar and Victory Medal were packaged within an informational folder, which also contained images of the American Campaign Medal, Asiatic-Pacific Campaign Medal, and European-Africa-Middle Eastern Campaign Medal. These medals were awarded to the more than 16 million American men and women who served in the Armed forces during World War II.