The 45th World Money Fair formally opened on February 5, with the Republic of Korea serving as this year’s guest host. The media forum, which takes place just after the formal opening of the fair, is a popular event in which a selected group of mints and central banks have the opportunity to discuss upcoming coin issue programs for the year, as well as share ideas and themes with other mints.

Among some of the coins discussed were:

The Mint of Korea, or KOMSCO, highlighted their upcoming Winter Olympics program by unveiling their three-year issue schedule containing gold, silver, and base metal pieces; their first releases are expected later this year. 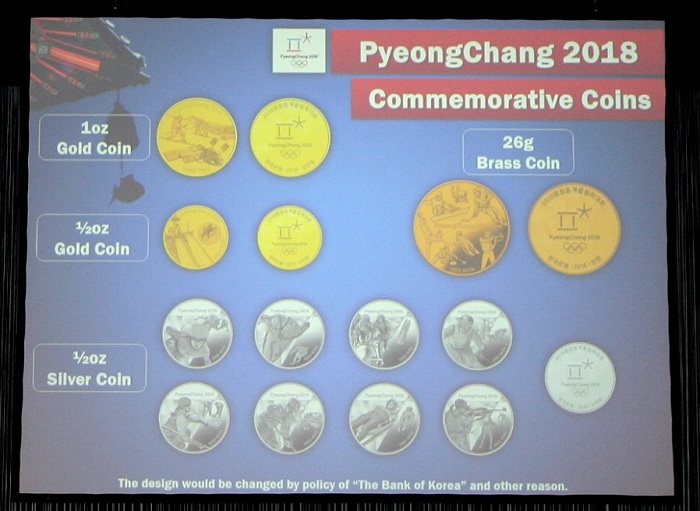 The South African Mint highlighted their Protea gold and silver series featuring images of the late Nelson Mandela. A new UNESCO and biosphere series was also unveiled; these coins will be issued in gold and silver and feature the Cape West Coast, where a biosphere project is currently underway.

The “Natura” 4-coin gold series will feature the hyena in its own environment. A sterling silver coin series featuring a two-ounce silver coin will highlight protected marine areas. The new South African Mint logo was prominently displayed during their presentation, as well as on their booth in the main auditorium. 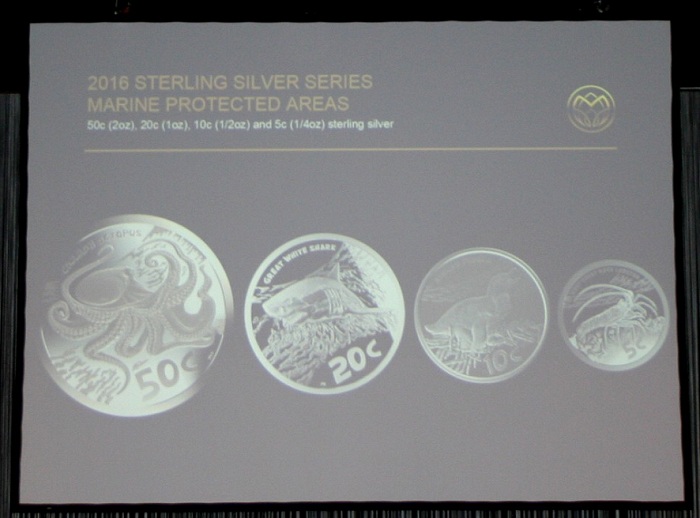 The Japan Mint’s successful “Prefectures” series, which represents each prefecture in Japan with one-ounce colored silver and bi-metallic coins, was brought to a conclusion late last year with a coin focused on Tokyo. The last two coins in the earthquake series were also mentioned in their presentation. A new bullet train series containing four base-metal coins will be issued later this year. 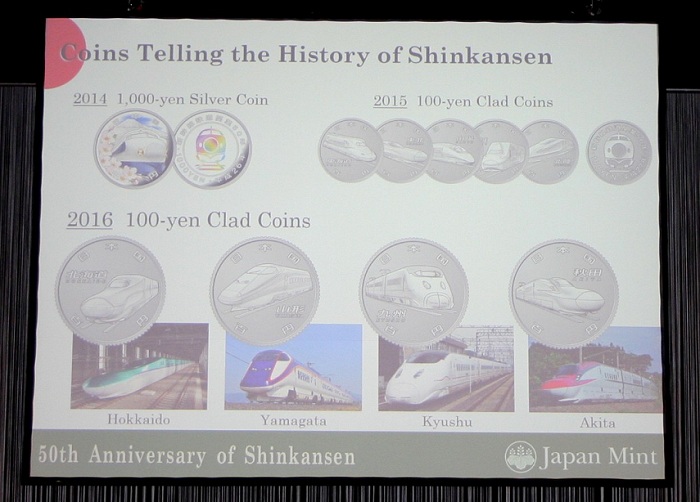 The Royal Canadian Mint discussed the addition of DNA technology to their bullion coin range, with readable security features detectable with a new patented apparatus. The official launch and demonstration were held later in the day at a separate reception.

The Swiss Mint introduced a new bi-metallic 10 franc coin featuring one of Switzerland’s most recognized flowers, the alpine edelweiss. Another new coin will celebrate the country’s newest and most technologically advanced tunnel, the Gotthard Tunnel, which is scheduled to open in June of 2016. 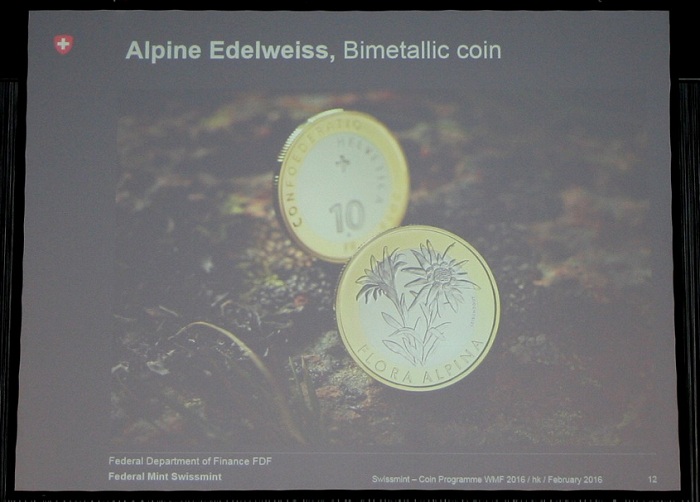 The Imprensa Nacional Casa da Moeda, or Portuguese Mint, unveiled their EUROPA silver star coin for 2016, which features Modernism in Portugal. A special €2 coin will be issued to celebrate the 50th anniversary of the Salazar Bridge, since renamed the 25th April Bridge after the day of Portugal’s corrective revolution in 1974 which brought an end to authoritarian government. 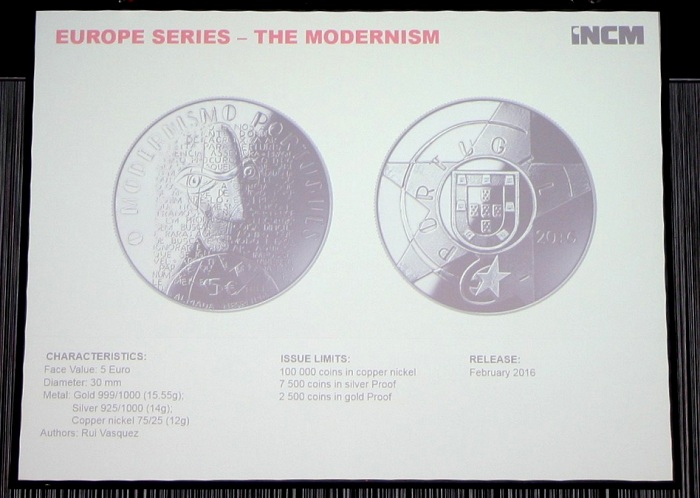 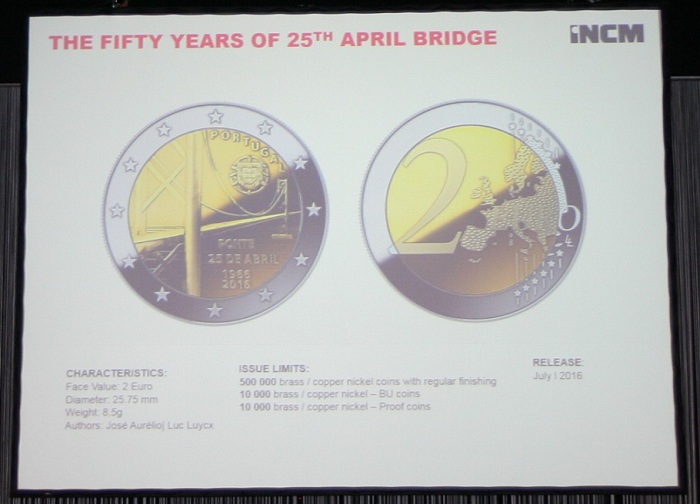 The Mint of Austria unveiled the latest release in their gold wildlife series, featuring the fox in its environment. More noteworthy was a new Platinum “Philharmonic” one-ounce coin, unveiled the next day. The coin includes the familiar musically-inspired design of the gold and silver coins of the same name. 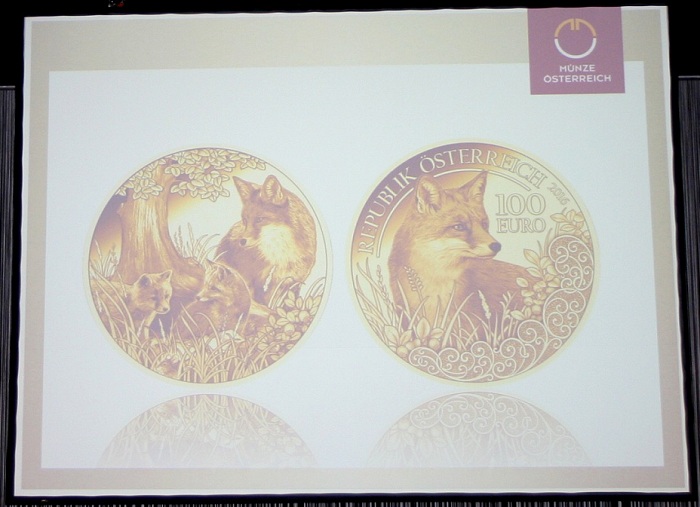 The Kremnica Mint, official mint for the Slovak Republic, unveiled a silver coin to be issued on the occasion of Slovakia’s assumption of the rotating Presidency of the European Commission, which will occur on July 1 until January 1, 2017. 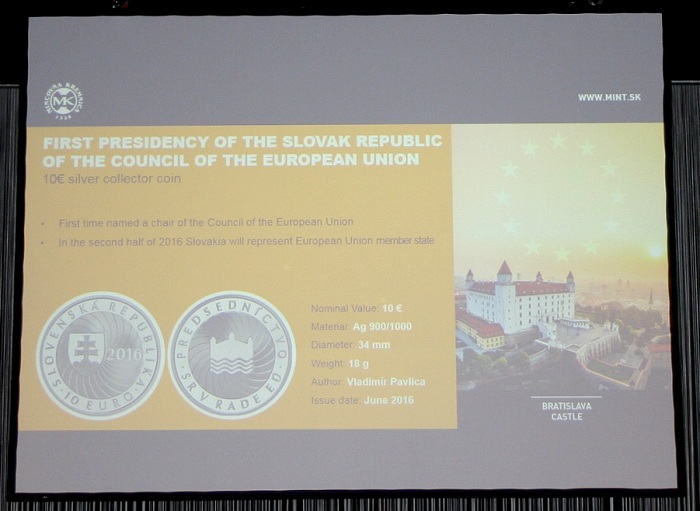 The Mint of Gibraltar, a relative newcomer to the activities, has highlighted a new silver crown coin remembering the 75th anniversary of the evacuation of Gibraltarians from their territory during the Second World War. The coin’s obverse includes an excellent portrait of HM Queen Elizabeth II, designed by veteran coin designer, Raphael Maklouf; he was the designer of the Queen’s third effigy for British and commonwealth coinage. A seven-coin series celebrating the 90th birthday of Queen Elizabeth II was also unveiled. 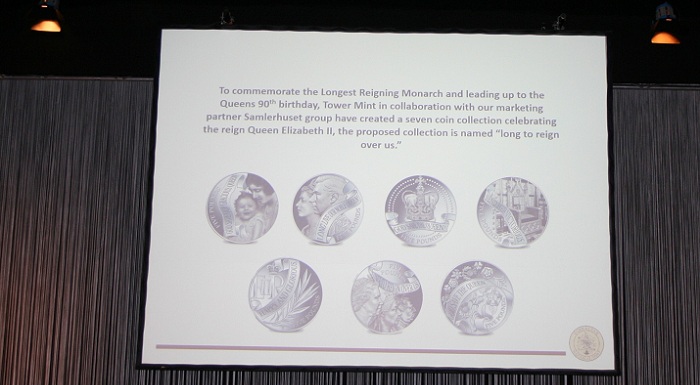 The Royal Australian Mint’s presentation concerned the 50th anniversary of the 1966 decimalization of Australia’s currency, when the country abandoned its pounds, shillings, and pence system in favor of a dollar divisible by 100 cents. Several new products feature coin designs used before decimalization, as well as nostalgic sets coming up later in the year. 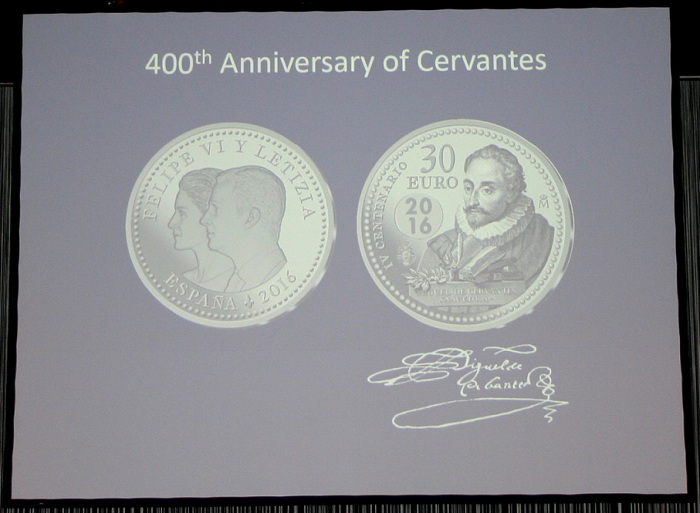 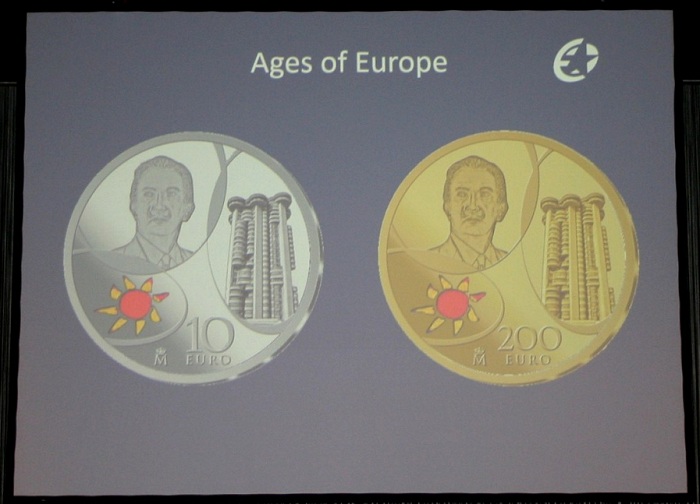 The IPZS or Italian State Mint unveiled their extraordinary EUROPA silver star coin which includes Enzo Ferrari, founder of the iconic sports car brand. Participating countries will all use a common reverse design for the first time since the start of the EUROPA series.

The Royal Dutch Mint took the opportunity to explain why the Mintmaster’s mark was changed and why the move was significant to Dutch coins. With the departure of CEO Martin Brouwer from the Royal Dutch mint at the end of 2015, his mint mark — a stylized sailing ship — was retained, but a small star will be added to the upper left of the mark. The star signifies an interim Mintmaster and will be replaced with a new mark when a permanent Mintmaster is announced.

The Central Bank of Ireland discussed their upcoming coin issuing program for 2016. Their first ever €2 commemorative coin was at the center of the presentation, during which Joe McMahon, Manager of the Collector Coin Department for the Central Bank, shared examples of the coin with Hans-Hennig Gohrum and Dr. Albert Beck. The Central Bank’s next silver and gold collector coins will mark the 100th anniversary of the Easter Rising, which led to Ireland’s independence as the Irish Free State in 1922. 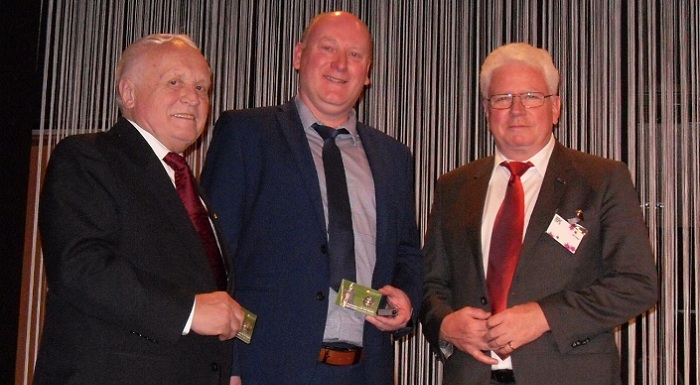 With the conclusion of the media forum, the State Secretary for the German Ministry of Finance, Dr. Michael Meister, took to the podium to present Germany’s latest circulation type 5 euro coin, which includes a blue-tinted polymer ring in between two base metal pieces. The coins were presented to the World Money Fair’s current President, Mr. Hans-Henning Gohrum, and honorary lifetime president, Dr. Albert Beck. The coins are scheduled for issue later in the year. 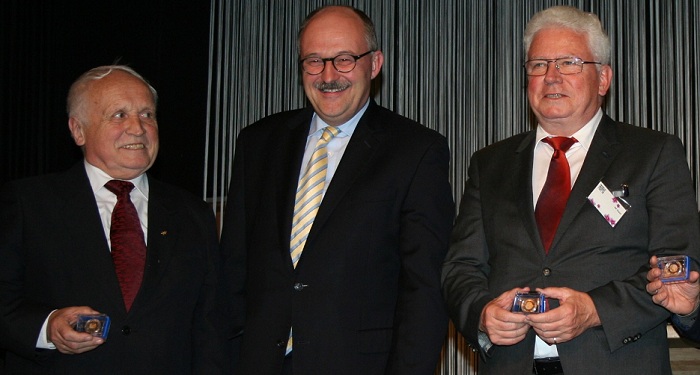 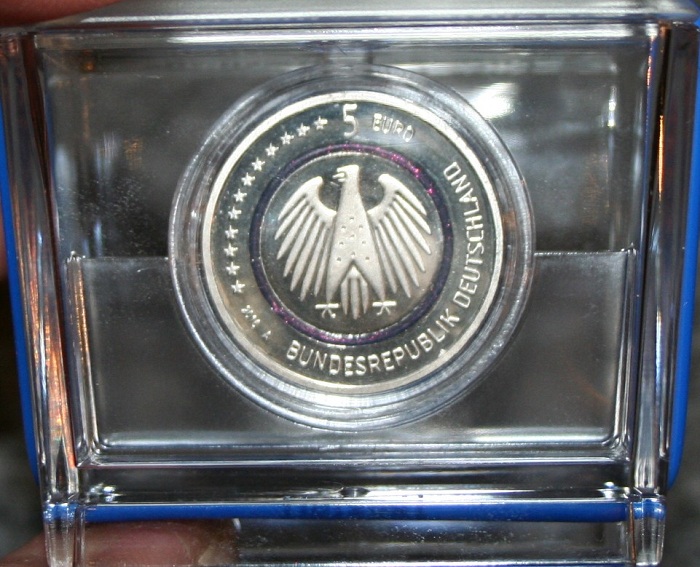 Coin Update will have further information on many of these coin issues closer to their release dates; please check back with our main page as the information is updated daily.