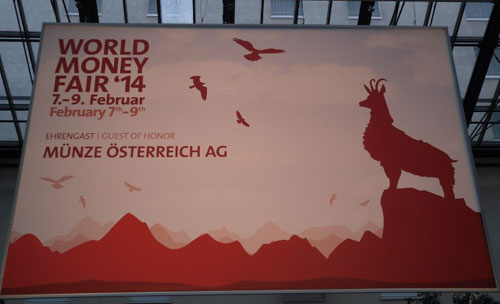 On Friday 7th February, this year’s eagerly anticipated World Money Fair was officially opened by Honorary President Dr. Albert Beck along with Gerhard Starsich, the CEO of the Austrian Mint – 2014 guest hosts of the three-day event as well as WMF director Barbara Balz. The red ribbon was cut and the event was opened as hundreds of awaiting collectors who gathered early on to be among the first through the doors to grab an exclusive WMF item offered by several Mints or the many dealers eager to make this their best fair in terms of sales. 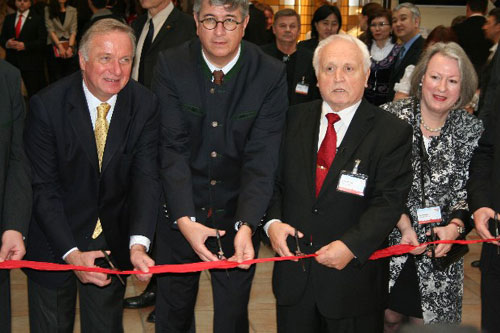 The official opening the World Money Fair on the Friday morning, CEO of the Austrian Mint (centre) along with honourary president Dr. Albert Beck and Director Barbara Balz to his left.

This year’s world Money Fair which was held at Berlin’s Estrel convention Centre included 55 National and private Mints or Central Banks who were selling some of their 2013 and 2014 products directly to collectors. Among some of the exclusive products available only to WMF attendants were the new 2014 Dutch Euro circulation coins with a special WMF packaging. The Royal Canadian Mint also offered an exclusive strike of the iconic silver maple leaf which carried the World Money Fair distinctive logo. 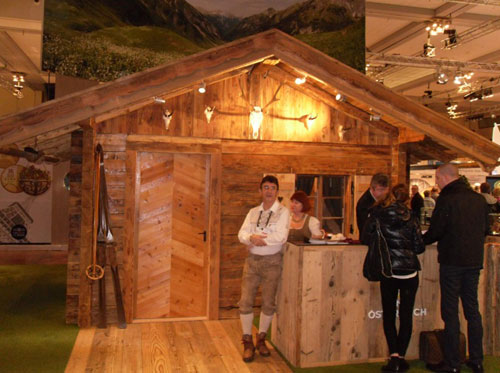 The Mint of Austria’s specially built pavilion, in the style of a Tyrolean farmhouse.

The Mint of Austria – Guest host of this year’s event, was front & center with a replicated typical Tyrolean wooden cabin, complete with a large cow – albeit carved from wood, on the front steps. Several coin and sets featured on their current product list were on display with many of the more well-known coins such as the niobium and dinosaur series sold out on the first day.

This year’s list of dealers topped more than 200 representing over fifty countries together with the 55 Central Banks & National Mints, the selection for world-wide coins was greater than at any time previous. The World Money Fair is for many collectors, a great opportunity to acquire the latest new issues direct from their source. Of particular interest this year was at the Bank of Latvia’s booth as 2014 marked the year of their change-over from the Lats currency to the EURO, they were the 18th country within the EU to do so. 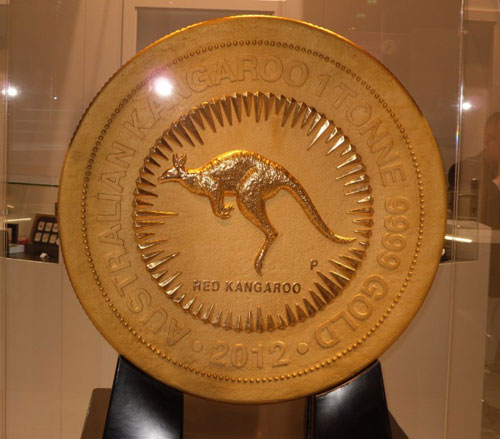 The Perth Mint’s one tonne gold coin is prominently displayed during the three day event.

The Perth Mint of Australia, makers of some of the country’s most innovative and collectable coins took this opportunity to display their own one tonne Gold coin – the largest coin in the world with a face value of one million dollars. The coin which features a hopping kangaroo on its reverse and a portrait of HM Queen Elizabeth II designed by British artist Ian Rank-Broadley on the obverse was behind a thick glass display case and guarded by security 24 hours around the clock. The one tonne coin with a diameter of 80 centimeters was the most photographed display at this year’s event. http://www.perthmint.com.au/1-tonne-gold-coin.aspx 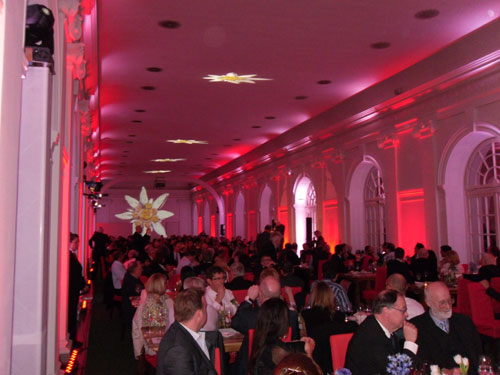 On the evening of the opening day of the World Money fair, it’s time for the guest host – this year the Austrian Mint, to host a Gala Dinner which all of the Central Banks and national Mints, the organizers of the WMF as well as personally invited guests of the host. The dinner, held at the Charlottenburg Palace. The largest palace in Berlin, it is the only surviving royal residence in the city dating back to the time of the Hohenzollern or Imperial family. The wing of the Orangery was bathed in red on the evening and the dinner was in the style of a Tyrolean country setting. The national flower of Austria, the edelweiss is projected onto the wall and ceiling with the “philharmonic” in the center of the flower! 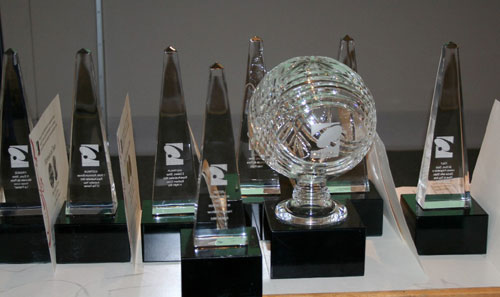 Trophies waiting to be awarded to the 2014 COTY winners – France take this year’s ultimate coin of the year for the 2012 Yves Klein 10-euro silver coinas well as the most artistic coin.

Saturday, the second day of the event was even busier as the city enjoyed a rather mild day in comparison to last year’s freeze and collectors were coming through the doors in a very steady stream for the first half of the day. The second day of the WMF also includes one of the most awaited events, the Coin of the Year (COTY) awards. Hosted by the US publisher Krause & FW Media who also sponsor the annual award, the 31st year of this prestigious acknowledgement focuses on outstanding achievements in the design and production of coins world-wide. Many nominated coins whose mints were present at the World Money Fair were frequently visited by collectors who were keen to see their latest products and displays of those coins included in the awards. View the 2014 COTY Award winners.

After the business of trade was over on Saturday, the Monnaie de Paris hosted their own champagne reception for invited guests which enabled the media to catch up with some of the mint directors and marketing representatives to find out about upcoming projects and products.

The Sunday and last day of the fair is usually a day to have one more last look at those coins which you meant to purchase on the two previous days and I can say from personal experience, it’s better to strike while the iron is hot because – chances are, that coin will most certainly be gone. Many dealers confirming they were happy with this year’s attendance and level of sales and also mentioning that happily, they will be flying back home with a reduced weight in their luggage!

Next year’s dates are still to be confirmed but it is likely to be the 6th to the 8th February 2015 – watch this space for confirmation. I can advise our readers that next year’s special guest host will be – the Royal Australian Mint and I know they are thrilled to have been chosen!