The organizers of the World Money Fair out-did themselves this year as the 2012 WMF was considered one of their best years yet with a noticeable increase of both coin enthusiasts, dealers, Mints and Central Banks from last year’s numbers. Held at the Estrel Convention Center in the former East Berlin, it was the sixth year in this convenient location and in Berlin. Previously the World Money Fair was based in Basel, Switzerland until the sheer size of the fair became too overwhelming for any of the available venues. 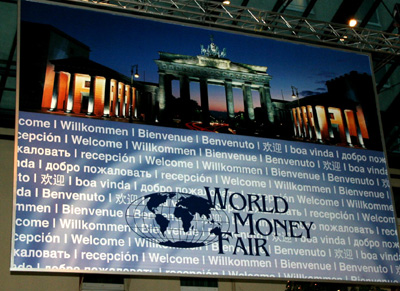 This year, the World Money Fair booked over 330 booths and also recorded higher numbers of attendants on both Friday and Saturday compared to the 2011 levels. The total number of attendants through the doors during the combined three day event totaled just over 15,000. Despite the below-freezing temperatures in the German capital, the cold was compensated by the sheer enthusiasm of the many who came to part with their Euros, Dollars, Francs, Pounds (even some Rubles and Yuan were seen floating about) for the extraordinary selection of numismatic rarities on offer.

A noticeable increase of dealers with high quality world coins was on show as well as more bullion-related merchandise, kilo-weight gold and silver coins & bars were not uncommon to see and more to the point, they were being snapped up with gusto. From ancient to the very latest issues from old and new world Mints and everything in between, two millennia of coins were amply represented at WMF. 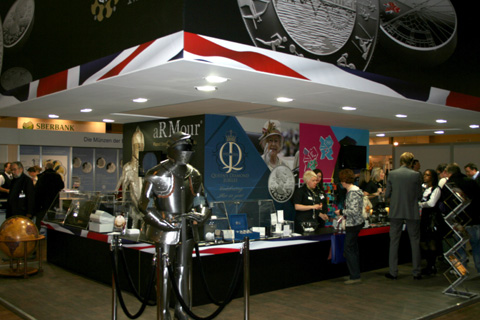 This year’s guest of honor was the Royal Mint and with this distinction, their branded pavilion in the main hall was the center of attraction. It is a particularly busy year for the Royal Mint as 2012 sees London hosting the 30th Olympiad and the Diamond Jubilee of Queen Elizabeth II. They played their part as guest of honor with merit providing eye-catching displays, a wide variety of products from the Olympics and Diamond Jubilee coins. Of special interest this year was the entertainment provided to collectors during their pursuit of “the” elusive coin-find with a Scottish Bag piper playing old and familiar favorites. A suit of Armour was keeping watch along with a genuine Yeoman who was on guard at the pavilion and the RM even engaged the services of one of Wales’ longest established Men’s Choir to entertain at both the Banquet dinner and Saturday’s morning session.

A particular favorite with the many delegates attending the WMF is the Gala Banquet which is held in honor of the Guest Mint. This year it took place at the Kosmos Palast, East Berlin’s well-known theater complex built during the years of the DDR which is now one of the city’s most popular nightclubs. Diners were treated to the Treorchy Male Voice Choir of which several Royal Mint employees are members of, it is one of Wales’ oldest choirs and their performance earned them a standing ovation from delegates. During the proceedings, it was announced that next year’s guest of honor will be the Monnaie De Paris…C’est Magnifique !

One of the highlights of the super-show was the auction on the 2nd February held by Künker. This year was especially notable as it set a German record for the highest paid coin at auction. The coin at the center of attention was the Russian “Family Ruble” which was struck in 1835. Inspired by the Bavarian King Ludwig I who had portrayed his own family on a commemorative coin in 1828, the Russian example has a denomination of 1 ½ Rubles and was intended for issue in Poland as a 10 Zlotych coin. With a mintage of only 50 pieces, the commemorative coin depicts Czar Paul I on the obverse along with the dual denominations of 1 ½ Rubles and 10 Zlotych around his portrait. The reverse includes cameo portraits of the Imperial family, that of the Czarina and their seven children. The uncirculated coin had an estimated reserve of €150,000, and the hammer eventually hit the gavel at €650,000. 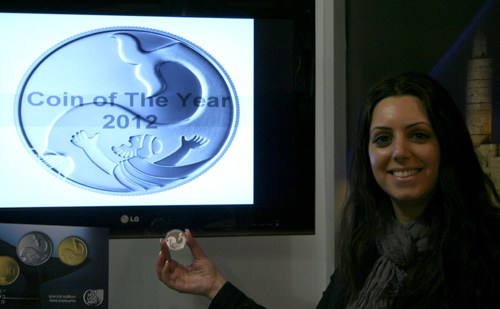 Saturday afternoon the delegates were invited to the Coin of the Year awards (COTY) sponsored by Krause Publications. Among some of the more noteworthy recipients were the Royal Canadian Mint for the most historically significant coin, that of the 400th anniversary of the Hudson Bay Co. The Ivory Coast was awarded for the most innovative design. Their win was for a 1500 Franc silver compass coin which enables the user to face east during prayer. For Coin of the Year, the award went to the Bank of Israel for their interpretation of Jonah and the Whale on a 2 Shekel silver crown coin from their biblical stories series. 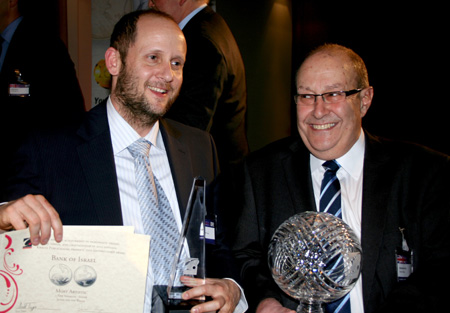 Next year’s date for the 42nd World Money Fair is the 1st to the 3rd February 2013. If you are a regular attendant of the World Money Fair, you will know that it can’t be described as just another coin show, it’s in a class all its own and truly an experience for every die-hard numismatist or collector of any level. Mark the dates on your calendar and join in on the fun and excitement that is the World Money Fair… see you there!