Beginning February 1, 2014, world coins will be eligible to receive NGC’s Star Designation, identifying coins with exceptional eye appeal that includes rainbow toning or intense luster. In 2008, the star designation was expanded to all grades of US coinage, but not world coins. Prior to 2008, the star designation was only valid for US coins grading between MS 63/PF 63 and MS 69/PF 69.

In other words, the star designation is expanding through the hobby like a supernova. This latest expansion is long overdue, but it brings up some interesting issues with respect to eye appeal and modern coins, which we will explore here as we report this new service by one of the top two numismatic grading companies.

First, the news: Max Spiegel, vice president of sales and marketing, states in a widely distributed news release that the NGC star designation has become the industry’s “premier recognition of exceptional eye appeal” for US coins. He adds, NGC’s decision to apply the designation to world coins was in response to “considerable feedback” from collectors and dealers.

In a phone conversation, Spiegel told Coin Update News that modern as well as older world coins are included in the Star designation policy. “There are no exclusions,” he said.

We brought up modern world coins for a reason. Several world mints are manufacturing exceptional eye appeal in the minting process, using a variety of metals or shapes. One mint in particular has been manufacturing eye appeal on a world-class engineering level, the Royal Australian Mint.

As some viewers know, I am a member of the Citizens Coinage Advisory Committee. At our last meeting, members recommended US and world coins that featured stunning innovation. One such coin was the Australian Mint’s 2012 Crux Southern Sky domed coin that won engineering innovation recognition for its beauty and shape. 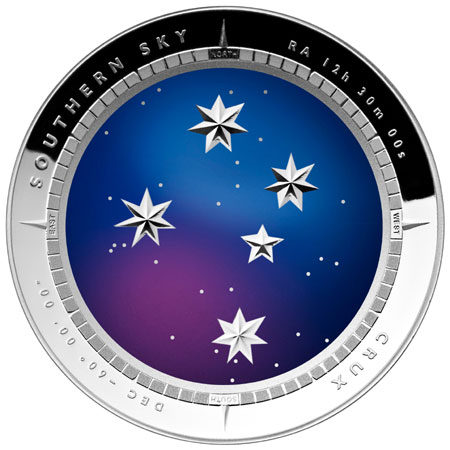 This is a magnificently designed and manufactured product the likes of which augur exciting things to come in world coins. However, this coin, in particular, would be hard pressed to earn an NGC Star designation a decade from now if, by some act of contact, it toned or developed intense luster. The colored fields are just too expansive for that, taking up much of the coin’s space. And the domed design adds a different kind of eye appeal than the traditional coin, old or modern.

As for intense luster, consider the 2013-W Enhanced Uncirculated Silver Eagle from the US Mint. Its design beauty was established in 1916 by Adolph A. Weinman’s Walking Liberty half dollar. Once again, in the modern version, US Mint engineering is at work, “enhancing” Weinman’s design by utilizing different finishes, from intense luster to light and heavy frosted finishes that play on any available light and suggest movement. 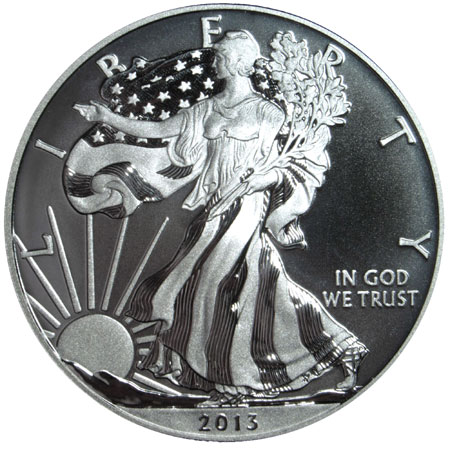 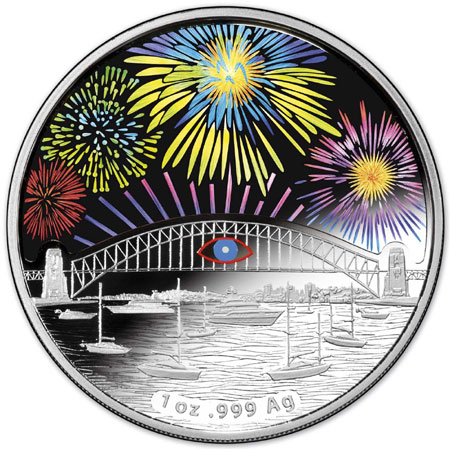 The issue of manufactured eye appeal vs. traditional eye appeal is new to numismatics.

As lovely as the 2012 Crux Southern Sky domed coin and enhanced Silver Eagle are, I still prefer how toning can make an inexpensive clad or silver coin dazzle with eye appeal and luster, which is why I support NGC’s expansion of the Star designation to all world coins. Think about eye appeal. Would you rather have a dazzling manufactured coin with interactive eye appeal that everyone else can buy online? Or would you rather have a common coin that few people have which develops eye appeal because of age or contact and showcases luster because of strike and condition?

One of my favorite world coins is the UK Royal Mint’s copper-nickel 1953 commemorative crown of Queen Elizabeth II’s coronation. 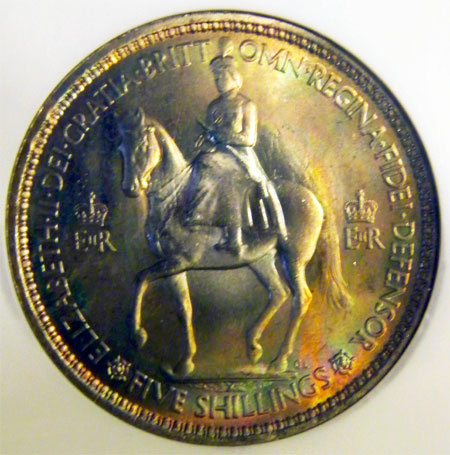 I bought the above coin about a decade ago for $35 at the Iowa Coin-a-Rama show near my hometown and sent it to NGC for encapsulation. It graded MS65 (no Star, of course) because of its intense rainbow toning and stunning luster. Thousands of people may have this particular cupro-nickel coin, but mine outshines them all because of its rainbow hues (both sides) and high mint state classification. That’s what the Star is meant to do! 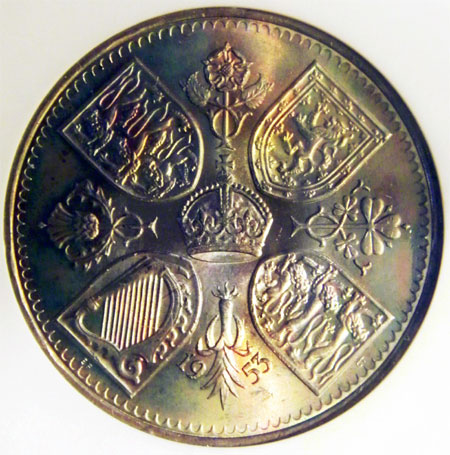 Why do I want the Star designation when I know several viewers of this column will criticize NGC for finding yet another way to earn revenue? (Those viewers are correct, by the way; the company’s designation didn’t need phases of expansion like an exploding star. It should have allowed all condition levels except MS/PF70 and all coins, including world, for this designation from the get-go.)

I admit it. I love my coins. I want them to earn a star. I’m resubmitting.