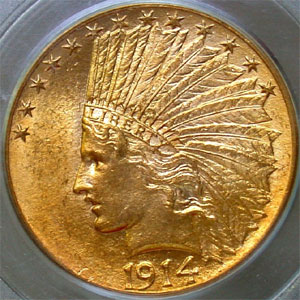 The benefits of having a hobby, such as collecting coins, tokens, medals, and paper money, are many. Here is a comment from The Numismatist in March 1914.

A few weeks ago a man who is the president of a national bank, a trustee of an historical society and an officer of an archaeological association, asked me this question: “What sense is there in collecting coins?”

This question, as undoubtedly you have learned by experience, is by no means an uncommon one to be asked even by men who are classed as intelligent. In my reply, I endeavored to convince my friend that coins are the most unerring and best preserved monuments of the ancient world and are historical records of supreme value, telling as they do of vanished cities long forgotten; giving portraits and names of rulers otherwise unknown, and standing as reflections of the time and country that issued them; that they reveal the religious belief of the ancient peoples and record the changing religious views of all the nations of the world during the last 2,500 years; that ancient and modern coins illustrate the history of art from its earliest stages of development to its highest excellence, thence to its gradual decline and almost total eclipse during the darkness and turmoil of the Middle Ages and to its rise since the dawn of the Renaissance; and in short, that coins are of the highest value to the historian, the student of comparative religion, the artist, the poet, the architect, and the man of letters.

After parting from my friend, and being not at all satisfied with the way I had answered him, I began to ponder the question, “What sense is there in collecting coins?” And from my reading of biographies, my acquaintance with men, and my knowledge of life, I came first to the conclusion that in order for a man to fully enjoy his earthly existence he must have a hobby.

Wealth and leisure, the combination which the world deems the source of happiness, in reality, as we well know, brings but little joy, unless the activities of the mind, body and spirit are continually engaged in riding a hobby.

Not long ago, the president of one of our largest trusts was obliged to undergo a serious operation. Though the operation was successful the strain so weakened the man’s heart that he was compelled to resign his office and give up active business. His physician gave him this advice: “You will never regain your strength or enjoy life until you choose a hobby and ride it hard. It will make no difference what hobby you adopt, but a hobby you must have if you are to find health and happiness.” This millionaire failed to take the physician’s advice, and having no business to occupy his mind save the cutting of coupons quarterly, is today one of the most restless, discontented and unhappy of men.

The business or professional man who has no special interest outside of his daily work is apt to find as the years pass and the silvery locks appear, that life becomes gray, dull and uninteresting. A few years ago, a man just past middle life, who, having amassed a fortune and feeling no longer the pressing need of close application to business, said to me: “I would give $10,000 if I could get a hobby and ride it as enthusiastically as you ride yours, but I don’t seem to be able to become interested in anything.” It was but two years from that time when this man, who possessed wealth and a civic and social position of prominence, was found dead in bed as a result of a self-administered drug. If I had been asked to write his epitaph, it would have been: ‘Having no hobby to ride, he found life not worth the living.’

On the other hand, a man with a hobby is too busy to be unhappy and has no time for ennui or the blues. As soon as his day’s work is done, with a leap and a bound, he jumps onto his hobby, and with cheer in his heart and enthusiasm stirring his blood, he enjoys a foretaste of heavenly bliss as he rides to his castle in Spain.

No careful student can fail to reach the conclusion that an unsatisfied and unhappy life is a “hobbyless” life and that the way to find happiness is to get a hobby and ride it with all the enthusiasm of your being.