President Woodrow Wilson was our 28th President. His Presidency was noted for the passage of the Federal Reserve Act of 1913, thus forming our current monetary structure and providing a means to finance our involvement in World War I, which he attempted to act as a mediator before the country was drawn into the fighting. The last two years of his second term were hampered after suffering a serious stroke, a fact that was largely kept from the public until after his death. This situation was cited as a strong argument for the 25th Amendment to establish a legal structure for Presidential succession. 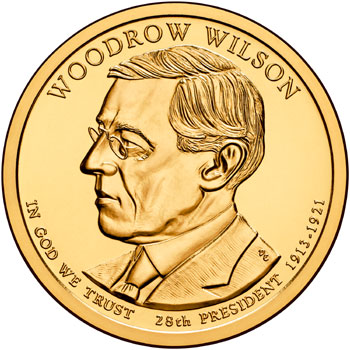 The coins bearing President Wilson’s image is the twenty-eighth in the series of Presidential Dollar coins, and the fourth and final to be issued in 2013. The obverses depicts Wilson, the time in office (1913-1921), and the motto “In God We Trust”. The reverse shows the Statue of Liberty in the same design as been depicted on all Presidential dollars. The edge has the motto “E PLURIBUS UNUM”, the year of issuance, and the mint mark.

The Woodrow Wilson Presidential Dollar will be released on October 17th, 2013. As Presidential Dollar coins are still being produced under the Treasury Department’s suspension of production for general circulation, they will only be available from the U.S. Mint in the following products: