The United States Mint has announced the winner of its Baseball Coin Design Competition. Cassie McFarland of San Luis Obispo, California submitted the winning design featuring a 1960’s style baseball glove which will appear as the common obverse for the 2014 Baseball Hall of Fame Commemorative Coins. 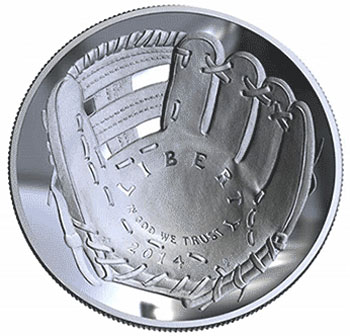 As required under the authorizing legislation Public Law 112-152, a public competition was held to select the obverse design for the upcoming coins. During the submission period from April 11 to May 11, 2013, a total of 178 designs were received. The field was narrowed to 26 semi-finalists following a round of internal judging which evaluated the designs based on artistic merit and how well they would translate into a coin format. The semi-finalists were reviewed by a panel of five Baseball Hall of Fame judges which narrowed the field to 16 finalists. These finalists were reviewed by the Commission of Fine Arts, Citizens Coinage Advisory Committee, and National Baseball Hall of Fame who offered their recommendations.

The Acting Director of the United States Mint made a final recommendation weighing all relevant factors, with the authority to select the final design resting with the Secretary of the Treasury. The final design was selected on September 9, 2013.

As the winner of the competition, Cassie McFarland will have her initials appear on the coins and receive a prize of $5,000. 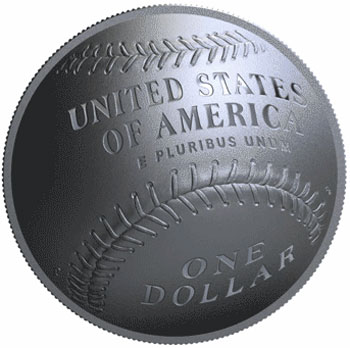 The common reverse design for the coins was previously announced in July 2013 and features a depiction of a baseball similar to those used by Major League Baseball. The reverse was designed and sculpted by Don Everhart. The design was approved by the Secretary of the Treasury on May 20, 2013 following consultation with the Commission of Fine Arts, Citizens Coinage Advisory Committee, and National Baseball Hall of Fame.

The commemorative coin program will include up to 50,000 $5 gold coins, up to 400,000 silver dollars, and up to 750,000 clad half dollars featuring these common obverse and reverse designs. The coins will be issued in both proof and uncirculated qualities during the 1-year period beginning on January 1, 2014. The United States Mint has indicated that the coins will go on sale in early 2014.

All three of the coins will have a curved shape so that the obverse will be concave for a more dramatic display of the artwork and the reverse will be convex to more closely resemble a baseball. These will be the first curved coins ever minted by the US Mint. Research and development related to the coins is unprecedented in recent United States Mint history. It covered height of relief limitations; milling, turning and grinding operations; coinability issues; laser frosting and proof polishing; and proof, uncirculated and clad test strikes.

As provided in the authorizing legislation, the sales prices for each coin will include surcharges distributable to the National Baseball Hall of Fame to help finance its operations. The surcharges will be $35 per gold coin, $10 per silver dollar, and $5 per half dollar.