The United States Mint has started accepting orders for the 2013 William McKinley Presidential Dollars in rolls, bags, and boxes. This represents the first release of the year for the Presidential $1 Coin Program for 2013 and the twenty-fifth release overall.

The obverse design of the coin features a portrait of President McKinley designed and sculpted by Phebe Hemphill. The inscriptions include “William McKinley”, “In God We Trust”, “25th President”, and “1897-1901”. The reverse of the coin carries a rendition of the Statue of Liberty designed by Don Everhart and used for each issue of the series. The inscriptions include “United States of America” and “$1”. The additional inscriptions “2012”, “E Pluribus Unum”, and the mint mark are incused on the edge. 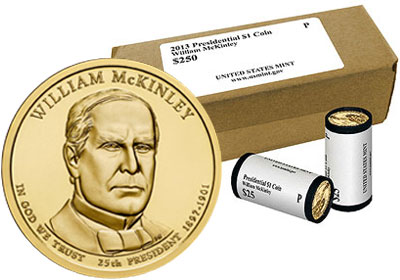 Following a decision announced in December 2011 by the Treasury Department, the Presidential Dollars are no longer produced for circulation. Rather, the coins are produced in the limited quantities necessary to fulfill demand from collectors. These coins are only sold at a premium to face value within numismatic products offered by the US Mint.

The next release of the series will feature President Theodore Roosevelt. Bags, rolls, and boxes of circulating quality examples of the coin are scheduled to go on sale April 14, 2013.