The United States Mint has started accepting orders (March 19th) for the 25th release within the American Presidency $1 Coin Cover series. This cover honors William McKinley who served as President from 1897 to 1901 until he was assassinated by an anarchist just a few months into his second term. 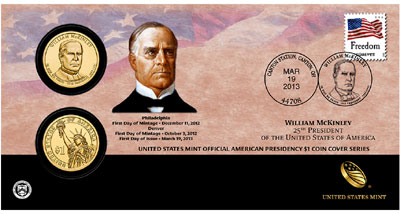 This unique product provides collectors with the opportunity to purchase the coins sourced from the first day of production. For the 2013 William McKinley Presidential Dollar this occurred on December 11, 2012 at the Philadelphia Mint and October 3, 2012 at the Denver Mint.

Each William McKinley First Day Coin Cover contains two coins which are mounted on a display card and placed within an illustrated envelope. The front of the envelope contains a color portrait of the President, while the back contains a brief description of his term and the coins. Each cover includes one of four USPS Four Flags Forever stamps, which is post marked March 19, 2013 Canton, OH.

The covers are priced at $19.95 each. A production limit of 20,000 covers has been established. There are no household ordering limits imposed.