President William McKinley was our 25th President. His Presidency was during a time of great economic growth in the country, which included the passage of the Gold Standard Act in 1900. He led the country through the Spanish-American War of 1898, after negotiations broke down over Cuban independence, as well as the annexation of the Republic of Hawaii. He was the last President to serve in the Civil War, and the fourth to die while in office, continuing the so-called “Curse of Tippecanoe” of Presidents elected in years ending in zero. 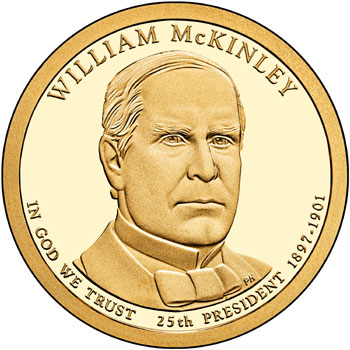 The coins bearing President McKinley’s image are the twenty-fifth in the series of Presidential Dollar coins, and the first to be issued in 2013. The obverses depicts McKinley, the time in office (1897-1901), and the motto “In God We Trust”. The reverse shows the Statue of Liberty in the same design as been depicted on all Presidential dollars. The edge has the motto “E PLURIBUS UNUM”, the year of issuance, and the mint mark.

Circulating quality examples of the William McKinley Presidential Dollar will be released on February 19th, 2013. Following the Treasury Department decision to suspend production of the series for circulation, the coins will only be available for purchase directly from the U.S. Mint in the following products: