The Royal Canadian Mint have launched three new coins which focus on some of this vast country’s extraordinary wildlife which abounds in much of the northernmost parts of Canada. The polar bear is a common sight in Canada’s arctic regions, and the caribou are common sights from coast to coast. 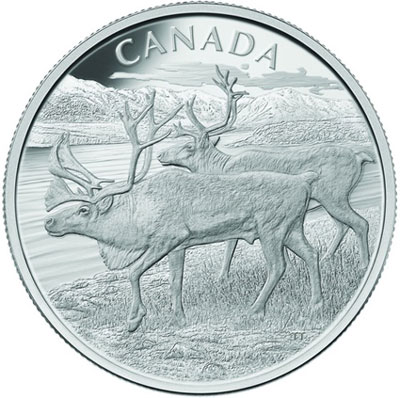 New pure gold and silver kilo coins feature Canadian artist Trevor Tennant’s illustration of a male and a female Caribou against an Arctic landscape in a scene brought to life by the ingenious use of contrasting finishes. With about 2.4 million caribou roaming freely through the vast Canadian wilderness, the North American nation is home to one of the world’s largest populations. Native to Canada, four subspecies of Rangifer tarandus occupy tundra and boreal zones spanning from the west coast to Newfoundland, and from the USA-Canada border to Ellesmere Island. Exceptional travelers as they are, the caribou cover more ground in their migrations than any other land animal: in fact, some of Canada’s caribou populations travel up to 5,000 kilometers each year. 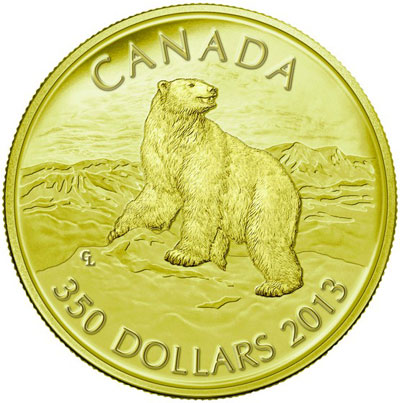 As different in size in real life as they are on coins, the iconic Polar Bear graces a 35 gram, 99.999% pure gold coin. Artist Glen Loates’ impressive depiction of the majestic polar bear is a fitting icon for a nation that, like Ursus martimus itself, has been shaped by the forces of ice, wind, water and stone. Stoic and strong, adaptable and clever, the polar bear has long captivated the Canadian imagination and been held up as a symbol of the northern spirit. At a hulking weight of up to 600 kilograms, the polar bear is considered the largest bear not only in North America, but the entire world. Today, approximately 15,000 polar bears reside in the Canadian Arctic, comprising the greatest number worldwide.

The three coins include the well-known part-profile of HM Queen Elizabeth II as sculpted by Susanna Blunt.

Please visit this page to view these coins as well as the most recent product releases from the Royal Canadian Mint. Information offered in English and French, international orders fulfilled.