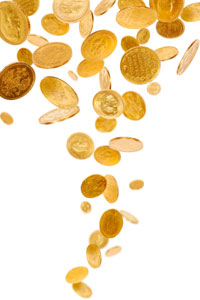 Over the years, various US government officials have admitted to extensive interventions in almost all markets other than precious metals.  This has led more than one analyst to observe that “there are no markets, only interventions.”

On May 4, the price of gold surpassed $1,190 just after 9:00 AM Eastern.  There was a significant prospect that the spot price might shoot up past $1,200 before the COMEX close.  If gold were to reach this significant threshold, along with the support of a silver price that had risen more than 6% in the past half month, that could have presented huge problems for the US government.  A rising gold price indicates falling confidence in the US dollar, which would mean that buyers of US Treasury debt would likely demand a higher interest rate to protect against this risk.

It is pretty much an open secret that the US government is funneling resources to its trading partners to allow them to buy stocks (and their derivatives) of the companies that make up the Dow Jones Industrial Average, so as to push up this key financial indicator.

On May 4, the US government faced a difficult choice.  Its array of tactics used to suppress gold and silver prices had largely failed in recent weeks.  Precious metals prices were even rising in recent days when the US dollar itself was rising against other currencies!  The one event that did still seem effective at pushing down gold and silver was a broad decline in the US stock markets.

To me, it is plausible that the president’s Working Group on Financial Markets (also nicknamed the “Plunge Protection Team”) decided that it faced two hard choices on May 4—either allow the price of gold to risk rising to all-time record levels or to sacrifice US stock market prices in order to suppress the prices of gold and silver.

By 11:00 AM Eastern, the Dow Jones Industrial Average had suddenly dropped 2%, the NASDAQ was down 3%, and other US indices were similarly down.  European markets, which slightly overlap US market trading hours, were also down significantly.  Asian stock markets did not suffer as they were long closed by the time US markets opened.

The supposed reason for the decline in the US and European stock markets May 4 was the concern over the potential failure of the bailout of the Greek government.  However, there was no particular reason why this months-old financial story should have particularly affected markets that specific day.

So, I think there is a significant possibility that the US government allowed the stock markets to decline on May 4 (or maybe even helped push it down) primarily to hold down precious metals prices.

Beyond thinking that this turn of events could happen, I actually expected it to occur.  When the gold price declined earlier this year, my company established a substantial long position in the “paper gold” market at an average cost of about $1,115 per ounce.   I had instructed my traders to exit this position when they could liquidate for at least $1,190.  My reasoning was that, at least for the first attempt, the US government would not allow gold to reach $1,200.  We closed this position at $1,190.80 before prices fell by $20 in a matter of minutes.  My company realized a sizeable profit by counting on the US government to manipulate the price of gold before it reached $1,200.

Now that gold has dropped $20, we are again actively adding to our gold and silver long positions.  I don’t expect the current bargain prices to last long.

I doubt that there will ever be clear cut evidence to prove that the US government was or was not behind the sudden drop in precious metals prices on May 4.  However, it will almost certainly continue to be true, as it has for nearly the past decade, that more profits can be realized trading on the basis that gold and silver prices are manipulated—instead of believing that they are trading in free markets.