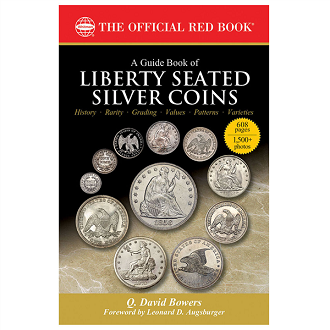 (Atlanta, Georgia) — Whitman Publishing announces the release of A Guide Book of Liberty Seated Silver Coins, by Q. David Bowers. The 608-page book (number 21 in the popular Bowers Series) is available from booksellers and hobby shops nationwide, and online (including at www.Whitman.com), for $29.95.

Coins with the Liberty Seated design were minted from 1836 up to 1891. The motif was used on circulating half dimes, dimes, quarters, half dollars, and silver dollars, in addition to twenty-cent pieces, Gobrecht dollars, and, in modified form, U.S. trade dollars. The mints at Philadelphia, New Orleans, Carson City, and San Francisco were used to produce tens of millions of these coins. They were minted from the Hard Times Era through the nation’s gold and silver rushes, the Civil War and its aftermath, and well into America’s Gilded Age.

Today Liberty Seated coins are growing in popularity among U.S. coinage series, with many enthusiastic collectors and students. The Liberty Seated Collectors Club is among the hobby’s fastest-growing specialty groups. Leonard Augsburger, vice president of the club, who wrote the Guide Book’s foreword, stated that “Q. David Bowers offers both beginning and experienced numismatists a fresh perspective on collecting these fascinating silver coins.”

Author Bowers provides colorful historical context for the coins, commenting on the American scene (and the state of numismatics) from 1836 to 1891. Then he covers all eight denominations that carried the Liberty Seated design, with a coin-by-coin catalog of more than 750 entries. Bowers discusses mintages, grading standards, auction records, keys to building a high-quality collection, and other factors important to collectors and investors. He describes each coin’s availability in Mint State and in circulated grades; characteristics of striking; pattern coins for each denomination; production, release, and distribution; branch-mint coinage; Proofs; die varieties; shipwreck finds; conservation; and more. The book is illustrated with more than 1,500 images.

Appendices include a chronology of coin designer Christian Gobrecht; an overview of the mints used to strike Liberty Seated coins; Mint directors and superintendents of the era; an account of a visit to the Philadelphia Mint in 1861; chief coiner Franklin Peale’s description of die making in 1855; a study of master dies and hubs by professional numismatist John Dannreuther; a look at alternative U.S. currency formats of the 1800s (Postage Currency, Standard Silver, and goloid dollars); and a catalog of die and hub trials and splashers, based on the work of Saul Teichman.