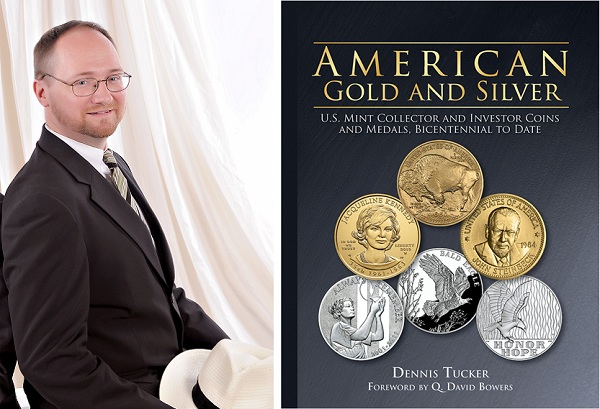 Dennis Tucker, author of American Gold and Silver: U.S. Mint Collector and Investor Coins and Medals, Bicentennial to Date, will give two talks at the 2016 American Numismatic Association World’s Fair of Money in Anaheim.

Thursday, August 11, at 4:00 p.m.—“Money Talks” presentation: “So-Called Dollars in the Mega Red Book,” with Jeff Shevlin and William D. Hyder. For the first time ever, an illustrated appendix on So-Called Dollars appears in the latest Mega Red, the deluxe edition of the Guide Book of United States Coins. Shevlin, Hyder, and Tucker discuss the importance of these fun-to-collect pieces of American history. (Room Avila A, fourth floor of the Anaheim Hilton, adjacent to the Anaheim Convention Center)

Friday, August 12, at 11:00 a.m.—“Money Talks” presentation: “Hidden Profits in Modern U.S. Mint Silver and Gold Medals.” Since the early 1970s the U.S. Mint has produced more than 50 collectible silver and gold medals—beautiful and sometimes rare works of art. Some were runaway best-sellers and made national headlines. Others are relatively unknown. Learn which ones are “sleepers”—underappreciated treasures with profit potential waiting to be discovered. (Room Avila A, fourth floor of the Anaheim Hilton, adjacent to the Anaheim Convention Center)

Tucker is a life member of the ANA and a past governor of the Token and Medal Society. He has been the publisher at Whitman Publishing since 2004 and serves as an advisor to the Secretary of the Treasury as a member of the Citizens Coinage Advisory Committee.