Last year Coin Update reported that NGC would be adding a new “First Releases®” blue label, responding to client and dealer feedback about its “Early Releases®” label, which remains the default designation on all submissions unless the First Releases® label is specifically requested.

NGC continues to state that there is no functional difference between the Early and the newer First Releases® label signifying that selected coins were “received by NGC or an NGC-approved depository during the first 30 days of release.” 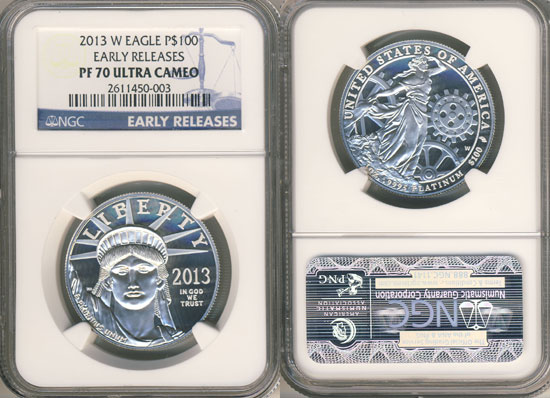 Some nine years ago, NGC began issuing “First Strikes” labels but withdrew that when a lawsuit was settled in 2007 over the implication of that term.

This article is not a retrospective about NGC’s withdrawn “First Strikes” label or the current PCGS trademarked FirstStrike® label, which has evolved into a premiumed commercial brand commanding higher auction values–an important and, in this case, successful corporate consideration in any new label designation. (Tip to both companies: Please use the symbol ® on your websites when referring to your trademarked labels.)

The US Mint also has weighed in on this issue, which you can read here and to which we will refer momentarily.

Rather, this post is about NGC’s contention that “First Releases®” and “Early Releases®” are essentially the same. We will investigate which is more accurate and ask for your opinion on whether both should be maintained or one or the other discontinued.

One more disclaimer: While I am a member of the Citizens Coinage Advisory Committee, my views here are personal and do not reflect those of the Committee or the US Mint, although my experience with the CCAC is at the center of this post. 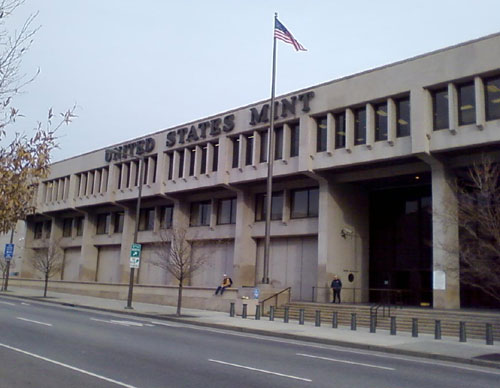 In May 2014 as a CCAC member I was privileged to get a close-up tour of the Philadelphia Mint. As a professor, I have spoken at the White House and can assure you the security at the Mint is triple-fold more intense. No photographs. No coins or metals in pocket or on person. Wooden clog-like shoe covers. Multiple entrance and exit checkpoints. So I cannot support with photographs what I am about to disclose here.

The special Mint tour, often on the floor of the manufacturing section (unavailable for visitor tours), was enlightening in many ways. Especially vivid in my memory are gargantuan bags of coins in special caged, palleted and stacked rows–about a dozen or so deep and three high–with rows three feet apart from each other in a storage area.

We’re talking hundreds of thousands of coins (if not millions) in each row with Mint tags as to date of storage.

Let’s return to the US Mint disclaimer on first strikes, which states:

“United States Mint products are not individually numbered and we do not keep track of the order or date of minting of individual [my emphasis] coins. Any dates on shipping boxes are strictly for quality control and accounting purposes at the United States Mint. The date on the box represents the date that the box was packed, verified and sealed, and the date of packaging does not necessarily correlate with the date of manufacture.”

To be sure, the Mint does not track any individual coins as to date of manufacture. But the facility does tag those cages in storage.

As a journalism professor and author of some 20-plus books, my manufacturing expertise is extremely limited … apart from the publishing industry. When books (or magazines, for that matter) are printed, before they are boxed and shipped, they are stacked on pallets, too, and put in rows … with the first off the presses moved to the back of the row … with each subsequent pallet of that row placed in front of the earlier stack.

In other words, first off the presses, last to be boxed and shipped.

That makes sense, no? Consider this: You need a forklift to stack and move pallets. You can stack more pallets with rows close to each other, only a few feet apart, too narrow for a forklift. As such, there is no logical or physical reason for a printer (or minter, for that matter) go to the beginning of a long stacked row to ensure that first manufactured are also first distributed. At shipping time, you go to the top pallet of the last-placed stack–those at the end of a long run–and forklift those.

As members of the CCAC walked from one site to another on the floor, I noticed that each stack had a file-card tag on the cage with the denomination and date of stacking. Yes, no individual coin is tracked by date. But stored cages are. So I sidled down a long stacked row towering over my head on either side to the back of a row to see if coin bags are stored there in the same way books are–first off the presses, last to be distributed. 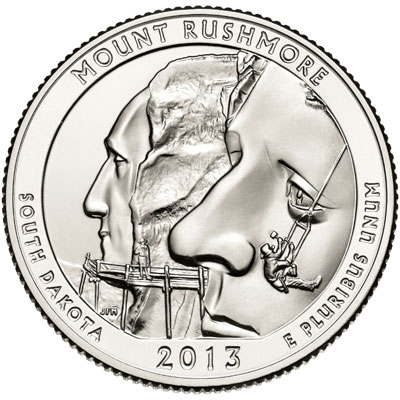 Serendipitously, the row on my right was the South Dakota America the Beautiful® Quarter released August 2013. (My journalism alma mater is South Dakota State University.) The Mint card on the eye-level cage stated a specific day in April 2014. Sure enough, as I emerged out of that row, from back to front, the dates continued through April into May, just as I had assumed.

Of course, my experience was only in one row because I had to catch up to the CCAC group. And as I had no pen (metal object) I had to rely on memory here (although dates and some facts about releases were fact-checked with the appropriate authorities). But it helped affirm something I had suspected all along without the slightest proof. At last now I had a smidgen.

Keep in mind that I am describing only what I witnessed first-hand, seeing and describing processes for circulating coins in bulk quantities. NGC designations are given to a specified list of numismatic and bullion issues. As opposed to circulating coins, numismatic coins may be produced in much smaller quantities and across different production runs with gaps in between. Nonetheless, common sense indicates that any amount of stacking–boxes, bins, bags, pallets, what-have-you!–must follow the same physical rules: first up, last out.

So let’s return to NGC’s labels whose operative words are “early” and “first.” Early suggests a time, as if the Mint released its product “early” in the mint process. That’s just not so. Before any official release, tens of thousands of coins are minted, bagged and stacked. However, of these, the Mint does release a portion determined by headquarters “early,” by sending them to Coin Wrap, Inc. These are wrapped and rolled. Factually, only these coins are true early releases.

Coins sent to Federal Reserve Banks where most are disseminated are not tracked as to date. They are neither early nor first, as we shall see.

“First” doesn’t suggest a time, just a box most probably from a top-stacked cage at the end of a row that went to packaging and shipping, well, first.

So that is our preference, First Releases®, rather than Early Releases®, which in reality would be accurate only if referring to coins sent to Coin Wrap in Harrisburg, Pa.

We’re living in a numismatic age where holders and labels add premiums. Companies exist for profit, and NGC and others are free to make profit as long as demand exists. We can like or dislike the label, or the demand, for that matter. But NGC’s situation is a case of offering two labels purportedly that mean the same thing. After researching this article for two weeks, we’re no longer swayed by that assertion. Turns out the Mint’s “early releases” (note the lack of trademark here) actually means something according to the Sales and Marketing Department. But that is besides the point. From a marketing perspective, which considers operative words, the terms “first” and “early” decidedly do not mean the same thing; it’s confusing and hurts branding.

We think NGC should retire the Early Releases® label, which also will help brand First Releases®.

Do you think it is time for NGC to retire one of those two labels? Keep both? Lose both? What is best for the company, in your view?

Keep this in mind: What is good business does not mean good for the hobby. We leave that up to you in the comment section.