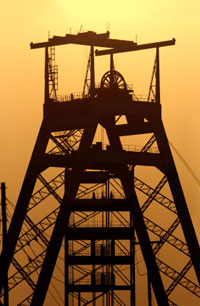 Now that the mining strikes in South Africa have largely finished, it’s a good time to take stock and look at what they mean not for the price of gold in the next few weeks, but for the next few years.  These strikes show a weakness in gold miners even in regions traditionally hostile to organized labor and puts an effective floor on the price for gold – unless demand craters.

First the facts.  South African gold and platinum mines have seen a series of very bitter wild cat strikes – in some cases with strikers shot .  There have been massive wage demands against troubling economic conditions and falling profitability, the usual recipe for industrial conflict.  Although most strikes have now finished, this does point to an essential weakness in precious metal mining – the fact that it is particularly prone to union militancy.

Strikes seem to be a thing of the past for most of us, particularly in the private sector.  Some of us vaguely remember strikes in the 1970s and 1980s, if we’re old enough.  There are many reasons why they are so rare.  Mostly it is the fact that many people had taken on debt so losing income for a month or two could also mean a stiff reduction in living standards – and when we finally are deleveraging we find ourselves in a recession and know that there are many people who want to take our job.

So it may seem like an odd time for the South African gold miners to strike – during a downturn.

Most commentators, when they notice the strike at all have put this down to a union turf battle, with a militant new union  trying to take ground from the venerable South African National Union of Miners, which has cozy relations to the ruling African National Congress.

However, union turf wars tend to happen for a reason.  The usual way in which unions will compete for members is through militancy, and that only really survives when the employer feels that they have to give in, eventually.

Deep mines, where most gold is produced, are particularly vulnerable as employers.  The reason for this is that there is an enormous amount of capital tied up in a deep mine, much of which simply cannot be moved.  This means that unlike a factory or an office an employer cannot simply set up shop in a less union friendly environment.  Their choice is to continue mining after meeting union demands or to shut down the mine and recognize a massive capital loss.

The strikes are a sign of things to come across the gold producing regions as unions start to realize their power.  This is going to throttle supply and should keep a floor on the price of gold.