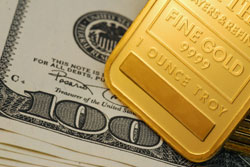 Something is developing in China which will have a major impact on the value of the US dollar and the price of gold.  The difficulty is in trying to figure out what is going to happen.

It is extremely rare for China to reveal its policies directly.  Typically, such announcements are gleaned from the statements made by minor officials, former officials, or researchers.  In such statements, it is typical for the person to say an issue is under study.  When you hear the Chinese referring to doing a study, it typically means that the decision has been made and, frequently, the government is already acting on its decision.

A perfect example of that process was revealed in April 2009.  The Chinese central bank disclosed that it had acquired a significant quantity of gold from 2003 through 2009, but did not change their reported central bank gold reserve until last spring.  Back in 2003, I had alerted my readers that China’s central bank was quietly adding gold reserves, but it took another six years for the information to be officially confirmed.  When I discussed China’s announcement a year ago, I said it was likely that China had already accumulated higher reserves than they then acknowledged.

China’s National People’s Congress commenced last Friday in Beijing.  In one of the early sessions, Zhou Xiaochuan, the governor of the People’s Bank of China said that the days when the China yuan currency would be pegged to the US dollar were numbered.  He described the current dollar/yuan peg as being “temporary.”

Zhou said, “If we are to exit from irregular policies and return to ordinary economic policies, we must be extremely prudent about our timing.  This also includes the exchange rate policy.”

Forecasters had been expecting the Chinese government to allow the yuan to rise possibly 5% against the US dollar by the end of 2010.  Any shift in value between the two currencies is important as the Chinese government held $894.8 billion in US Treasury debt as of the end of last December and about 2/3 of the country’s $2.4 trillion in reserves are denominated in US dollars.  If the dollar were to decline against the yuan, that would also reduce the value of China’s reserves.

Zhou’s announcement had the effect last Friday of pushing down the US dollar and contributed to a rise in the price of gold.  While that was a predictable result of the pronouncement, that is not necessarily the reaction that the Chinese government wanted.

Within a day of Zhou’s speech, Li Ruogu, the former deputy governor of the People’s Bank of China and current chairman of Export-Import Bank of China was interviewed and said, “I believe that, for now, supporting the dollar’s stability and its international currency status is good for China.”  He later said, “As China has a huge sum of foreign exchange reserves, a dollar collapse would bring nothing good to China.”  Still later Li said, “In the short run, maintaining a stable dollar is good for everyone.  It is good for the United States, good for China, and good for the world.”

Li’s statement, indicating support for the US dollar, had the effect of increasing the value of the dollar in trading early this week, which meant that the price of gold initially fell.

This direction of trading was further supported when The Wall Street Journal yesterday reported that China was trying to sound like it was not interested in purchasing gold now.  Yi Gang, current vice-governor of the People’s Bank of China and director of China’s State Administration of Foreign Exchange said, “Gold is not a bad asset, but currently a few factors limit our ability to increase foreign exchange investments in gold.”

So what exactly is going on?

I am not privy to the top level meetings of the US and Chinese governments, but I can make a reasonable guess as to what is and will likely continue to happen.

First, I suspect that China has already offloaded much of the risk of the decline in the US dollar by pledging dollar-denominated debt as payment for various international purchases of commodities and commodity-producing enterprises.  If this is true, China has a lot less concern over any decline in the dollar.  However, since the US government can use all the assistance it can get to hold up the value of the dollar, there may be some behind-the-scenes payoff as an incentive for the Chinese government to appear to support the dollar in the short term.

Second, China is definitely interested in adding more gold reserves, no matter what Li Gong said.  The Chinese have proven to be savvy negotiators.  Their current posture could be simply an attempt to be able to buy gold at a lower price.  They tried a similar tactic last year when the International Monetary Fund announced its plan to sell over 400 tons of gold (13 million ounces).  China offered to purchase the entire amount in one transaction, but wanted to get a quantity discount for doing so.

What I expect is actually happening now and will happen in the next year is that the Chinese government will continue to accumulate gold reserves and will allow the yuan to appreciate against the US dollar (but not by so much that it causes the dollar to collapse).  All of this will be done as quietly and secretly as possible, accompanied by public statements to the contrary, with a public acknowledgment coming only afterward.  The net result will be to help push the price of gold much higher than it is today.

In my judgment, the only way to outrun the Chinese government’s strategy is to lighten your exposure to the US dollar and stocks and bonds priced in US dollars and to acquire your gold position as soon as possible.  If you wait, you will regret it.