A 100-ounce gold nugget recently discovered in Northern California will be on public display at the Long Beach Coin, Stamp & Collectibles Expo, held from February 3-5, 2011.

The display is courtesy of Fred Holabird and Don Kagin of Holabird-Kagin Americana of Reno, Nevada.  They estimate the collector value of the gold nugget to be $250,000 to $400,000. 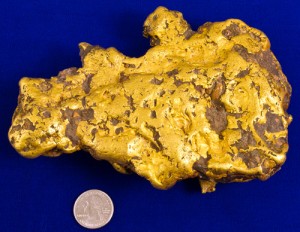 “It weighs just under 100 ounces — about nine pounds, and is the largest California gold nugget now in existence. It’s nicknamed the ‘The Washington Nugget’ because it was discovered near the famous Mother Lode Gold Rush mining camp near Washington, California in Nevada County last March,” said Ronald J. Gillio, Expo General Chairman.

During the Long Beach Expo more than 1,000 dealers will be buying and selling rare coins, paper money, stamps, postcards, historic documents, antiques, estate jewelry and other collectibles.  Some dealers will provide free, informal appraisals for visitors.

A free gold coin door prize will be awarded each day to a lucky visitor, and a children’s treasure hunt will be held on Saturday, February 5.  Nearly a dozen educational programs and collectors’ club meetings will be conducted in conjunction with the February Long Beach Expo.

Heritage Auction Galleries of Dallas, New York and Beverly Hills (www.HA.com), the world’s largest collectibles auction house and official auctioneer of the Long Beach Expo, will hold a public auction of U.S. coins during the show.  Professional Coin Grading Service (www.PCGS.com) will mark its silver 25th anniversary in conjunction with the show.

General admission is $8 (good for all three days); $6 for members of any coin or stamp club who display a valid membership card; and $4 for seniors 65 and older and for children ages 8 to 16.  Admission is free for children ages 7 and younger.  Discount coupons are available online at www.LongBeachExpo.com.

The Long Beach Expo is a division of Collectors Universe, Inc. (NASDAQ: CLCT).