One of the highlights in American numismatics was auctioned at the spring 2013 Central States Numismatic Society convention held in Chicago, IL. An example of the famed 1913 Liberty Head Nickel was sold by Heritage Auctions from Dallas, TX. The storied Walton Specimen, deemed to be the third finest of the five coins known to exist, realized $3,172,500 including the buyer’s premium.

There is a reason that the write-up in the auction catalog is one of the longest ever seen in any numismatic catalog,. First of all, it is not very often that a 100 year old coin that is so famed that even most casual collectors will be familiar with its rarity and back story. It also does not happen often (or at all) that the particular coin in question was deemed lost for over 40 years following an automobile accident in which the coin’s owner was tragically killed. And it almost never happens that one of the factors that brought the coin back into the numismatic theater was a substantial reward offered by Bowers and Merena. 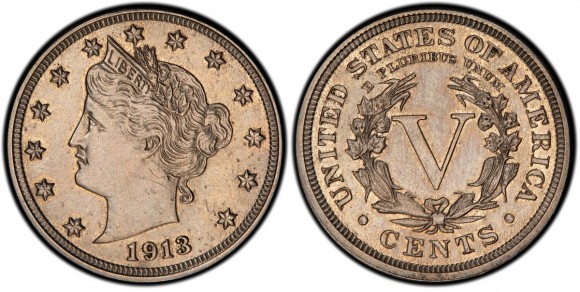 Extensive details about this particular specimen of the 1913 Liberty Nickel can be found in the auction description, which is well worth sitting down for, as some of the most well-known numismatic authors collaborated on the description. The story, very briefly, is as follows: After striking five 1913 Liberty Nickels at the Philadelphia Mint (for unknown reasons and perhaps in secrecy after the new Buffalo Nickel design had been introduced) all five examples traded hands numerous times as a group until they were sold individually by Eric P. Newman (the only person alive today that can say he owned all five 1913 Liberty Nickels at the same time). The finest known ended up in the Eliasberg collection while others were (most likely permanently) impounded in the Smithsonian and ANA collections. This left the Olsen specimen (most often encountered at auction during the past couple of decades) and the Walton specimen just sold by Heritage at Central States.

The Walton specimen traded hands numerous times before it was placed in the George Walton Collection. It was part of his collection which he took with him to a numismatic convention in North Carolina for public display. On the way there, Walton got into an automobile accident and was tragically killed. Most of his collection would be sold by family members shortly afterwards; people knew that there was a 1913 Liberty Nickel in his collection, but it was never sold. It had disappeared after the American Numismatic Society had deemed it to be a counterfeit, and returned to Walton’s family.

Fast forward to 2003, when a publicity stunt by Bowers and Merena revealed the long-lost fifth 1913 Liberty Nickel. It had turned out that the coin had been passed on within Walton’s immediate family, always carefully stored in a closet as a special family heirloom. The once-declared fake came to the light, was authenticated, and now offered for the very first time at public auction. This process is detailed in the auction description from several points of view, along with an interesting look on the process of authenticating one of the most counterfeited coins in the world. 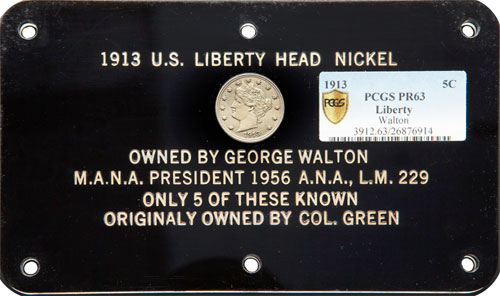 The Walton specimen might not be the finest known of the five 1913 Liberty Nickels that have survived the past century, but it surely is the most storied and the most colorful, almost as famous as the Olsen specimen that starred in a Hawaii Five-O episode. The coin resides in a black plastic case made by George Walton himself. It reads in all-caps “1913 U.S. Liberty Head Nickel” on top and “OWNED BY GEORGE WALTON / M.A.N.A. PRESIDENT 1956 A.N.A., L.M. 229 / ONLY 5 OF THESE KNOWN / ORIGINALLY OWNED BY COL. GREEN”. PCGS understood the historic significance of this holder and decided to leave the coin in the original when certifying the piece, instead placing a label on the front of the holder. This is one of the very few instances PCGS has done this, and it is another indication of the importance of the Walton Specimen of the 1913 Liberty Nickel. The coin might be off the market for a very long time, but when it reappears, it is likely to cause a lot of attention just as it did this time.