The Bank of Israel have issued a new set of coins which continues in the “Views of Israel” series launched in 2012 with the views of the port city of Eilat and its extraordinary coral reefs. The new series which carries the year “2013” focuses on the River Jordan – one of the most historically and religiously significant rivers, the Jordan has played sacred roles in Judaism and Christianity. It was near Jericho where the Israelites, led by Joshua, crossed the Jordan River to enter the Promised Land. The “Yardenit” baptismal site, where Jesus is said to have been baptized by John (Matthew 3:13) is visited by Christian pilgrims from all over the world. Many descend into the Jordan River at this site to be baptized and / or re-affirm their Christian faith.

The lowest river in the world with a meandering course of 250 kilometers and hardly more than 30 meters at its widest point, the Jordan River flows from north to south of Israel, through the Syrian-African Rift Valley, joining the Sea of Galilee to the Dead Sea. Its waters, which come mainly from the rain and snow that falls on the Hermon Mountain to the north, are a prime source of drinking water and irrigation for Israel and neighboring Jordan. The Jordan River has become one of the popular tourist sites of Israel. 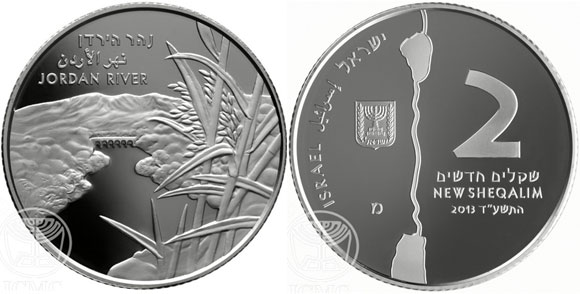 The three coins, a 10, 2 and 1 new sheqel strikes are produced at the Mint of Norway on behalf of the Bank of Israel. Designed by artist Meir Eshel, the obverse (which is common to all three denominations) depicts a beautiful view of the hilly northern part of the river’s course and characteristic vegetation on the banks of the river. A general view of the Jordan River in the distance on the horizon is the Hermon Mountain range and in the foreground, to the right, rocks and Common Reed vegetation. The reverse includes the Face Value, the Israeli State Emblem, the text “Israel” in English, Hebrew and Arabic, the Mint Year and Mint Mark. The Jordan River as it appears on the map, flowing from the north, southwards, connecting between the Sea of Galilee and the Dead Sea. 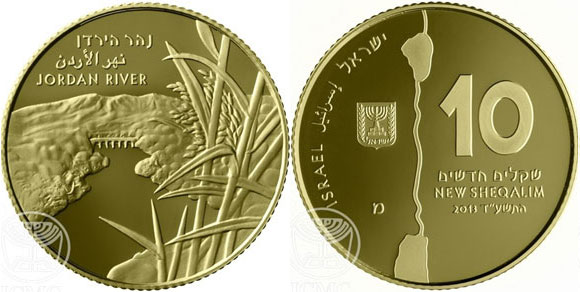 The 1 sheqel coin includes a Star of David to denote its proof-like quality. The 2 and 10 Sheqel coins carry the Hebrew letter “Mem” below the denominations indicating their proof strikes. The coins are available as a three coin set, as a two coin silver set or individually.

For more information on these and other coins offered by the Israel Coins and Medals Corp, please visit their website at: http://israelmint.com/the-jordan-river-coin Information offered in Hebrew and English – international orders dispatched.