The 1927 Vermont Sesquicentennial Half Dollar is one of the lesser known of the classic commemoratives. Its issuance had been secured by the act of February 24, 1925, a full two years before the actual coins were struck and sold. The coins were requested, issued, and sold by the Vermont Sesquicentennial Commission, which requested a relatively small number of 40,000 coins struck to commemorate both the 150th anniversary of the Battle of Bennington in 1777 as well as the independence of Vermont that same year. Total sales were less than that number, resulting in approximately 12,000 pieces melted, but enough were sold to collectors that the Vermont Sesquicentennial Commemorative Half Dollar is relatively easily acquired by modern collectors up to and including pieces certified at the gem (MS-65 level).

Vermont is a New England state that never was a separate colony but rather an area of the United States that was much overlooked by the British during their settlement of North-America. The State is situated between New York on the west and New Hampshire on the east, and those two states claimed present-day Vermont for their own respective states back in the 18th century. Between 1749 and 1764 Benning Wentworth, provincial governor of New Hampshire issued a series of land grants, an area that was also claimed by New York. These land grants would lead to the aforementioned dispute between the two states and, in 1777, the creation of the Vermont Republic (for the first 6 months of its existence it was called New Connecticut).

The creation of the Vermont Republic was the initiative of two brothers, Ira and Ethan Allen, who formed an informal militia named the “Green Mountain Boys”. The Green Mountain Boys would fight, under the leadership of Colonel Seth Warner together with militiamen from New Hampshire and Massachusetts under General John Stark in the Battle of Bennington on August 16, 1777 against the British, a decisive victory for the American “rebels” during the American Revolutionary War.

The Vermont Republic would exist independently until 1791, when it finally joined the Union as the 14th State and the first state not part of the original thirteen colonies that had declared independence in 1776. Prior to that Vermont had considered becoming part of the British possessions that made up Canada, but these plans never materialized. 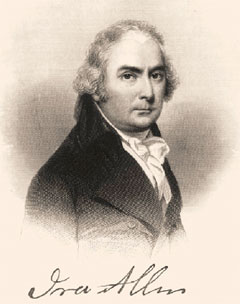 Ira Allen, younger brother of Ethan Allan is seen on the obverse of the commemorative half dollar issued in 1927 upon the 150th anniversary of independence of Vermont. Ira Allen had been extremely important in drafting the declaration of Independence back in 1777, had been the state treasurer of the Vermont Republic, but would eventually be captured by the British and taken to Europe before he returned to North America, never again serving any kind of position in the state that he had helped to create, dying a lonely men in Philadelphia several decades later in 1814. People from Vermont, however, had not forgotten him, and his portrait was deemed appropriate for a commemorative coin struck over 100 years after his death.

The design of the Vermont Sesquicentennial Commemorative Half Dollar was made by Charles Keck, after the Commission of Fine Arts had rejected numerous designs with depictions of the Catamount Tavern (where the Green Mountain Boys often met) and the Bennington Memorial, and depicted a representation of the Catamount Tavern whose meaning apparently very few people at the time realized. The reverse of the coin shows what appears to be a catlike animal, probably classified as a mountain lion, which served as a representation of the Catamount Tavern. The tavern’s name was the result of a mounted cat that was prominently displayed in the tavern which would led to the name “catamount”, which later appeared to have evolved to a nickname of mountain lions and other wild felines found in the mountains of Vermont. 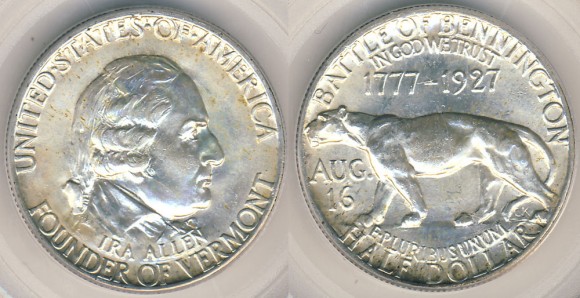 The obverse of the coin features a stylized bust of Ira Allen, facing right. UNITED STATES OF AMERICA is read above the bust, with dots placed between the words, while IRA ALLEN and FOUNDER OF VERMONT is seen below it, without dots. Besides the aforementioned feline (seen in a walking pose, facing left)  the reverse also features the words BATTLE OF BENNINGTON on the top, IN GOD WE TRUST placed directly under it, the dual years 1777-1927 right below that and AUG 16 in the lower left. Near the bottom is the motto E PLURIBUS UNUM and the denomination, HALF DOLLAR.

The coins were sold at local banks at double face value, or $1 each, with the proceeds going to the Vermont Sesquicentennial Commission. Coins were also distributed through the mail, with an additional 25 cents surcharge added to the price. A relatively large number of the total mintage was sold, approximately 75%, and the total mintage less returned and melted pieces was 28, 142 coins. Most of these were saved by collectors or as souvenirs, and the majority of pieces that exist in today’s marketplace do so in various states of uncirculated grades.

Even though the 1927 Vermont Half Dollar is not one of the more popular or famous commemorative issues, there is one fact related to this coin that is worth mentioning. The coin features the highest relief of any of the early commemorative coins struck by the United States Mint, which has led to common weakness on the central portions of the design, especially in lower uncirculated grades. A sharply struck and fully defined Vermont is quite a scarce coin, but fortunately for collectors with this knowledge most dealers seldom ask a premium for such quality pieces. This represents an opportunity for the conscious collector, as these pieces might prove good investments in the long-term when more collectors seek fully struck coins for their collections.