The Banco Central de Venezuela have begun to recall the current 2008 series of banknotes and replace them with six new, higher-value denominations in an effort to stabilize the economy and enable the public to conduct everyday purchases.

As inflation has essentially rendered worthless the denominations of the Fuerte (“strong”) Bolivar—originally introduced in 2008, also as a means of controlling Venezuela’s then-runaway inflation—the series, which featured vertical obverse designs and included denominations from 2 to 100 Fuerte Bolivares, was introduced at a ratio of 1,000 old Bolivares to one new Fuerte Bolivar. At the time of its introduction, the exchange rate between the U.S. dollar and the Fuerte Bolivar was set at 2.15 per U.S. dollar. The rate was later officially readjusted four times, with the last rate being set at 6.30 per US$1 before the black market determined that the Fuerte Bolivar was more realistically valued at 10 times the official rate.

Presently, the unofficial rate stands at just over 4,500 Fuerte Bolivares per US$1; however, the official exchange rate stands at 750 Fuerte Bolivares per US$1. The unofficial exchange rate is illegal to publish in Venezuela but is easily accessible online and through other electronic means. As a result, the 100 Fuerte Bolivar note—Venezuela’s largest denomination in circulation—has an official value of just 13 U.S. cents, though it is routinely traded at a rate of 2 cents. As a consequence, Venezuelans must carry bundles of 100 Bolivar banknotes to carry out routine shopping and daily transactions. The oil-rich economy under the Hugo Chavez and Nicholas Maduro governments and their policies of strict fiscal and consumer/manufacturing price controls within the economy have largely been cited as the fundamental reasons why the monetary situation has, for all practical purposes, collapsed. The International Monetary Fund has published their findings that the Venezuelan economy may experience inflation rates of up to 2,000% for 2017 if the fiscal policies of the Maduro government continue.


As of December 14, the Banco Central began to recall all 100 Bolivar banknotes, which are slated to be replaced with coins of the same value. The bank will also introduce six new denominations, from 500 to 20,000 Bolivares. The 2016-series notes reintroduce the same designs and personalities featured on the 2008 banknote series, though with new colors and varying security features. It is believed that additional coins, with values of 10 and 50 Bolivares, will be issued shortly, also replacing banknotes of the same value. Officially, the 20,000 Fuerte Bolivar note will have an exchange rate of US$26, but it is expected that the note will trade at the black-market rate, meaning it will be regarded to have a real worth of about $4.40. 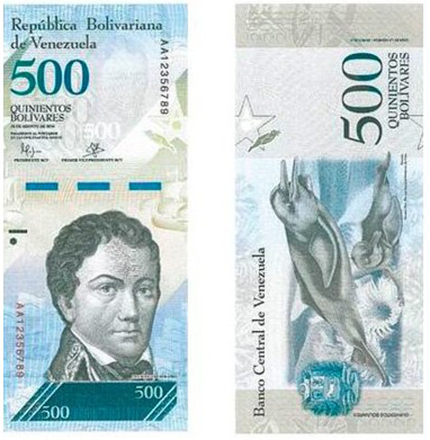 2016-series 500 Bolivares—Obverse: a portrait of Generalissimo Francisco de Miranda. Reverse: a scene depicting a species of freshwater dolphin that lives in the rivers of the Venezuelan plain. Design last seen on the 2008-series 2 Bolivar note. 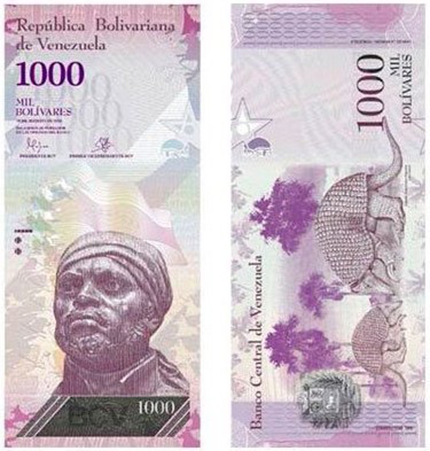 2016-series 1,000 Bolivares—Obverse: a portrait of Negro Primero (“the First Black”) Pedro Camejo, who was the first black man to be featured on a Venezuelan banknote. Reverse: a scene depicting the giant armadillo, whose species is endangered. Design last seen on the 2008-series 5 Bolivar note. 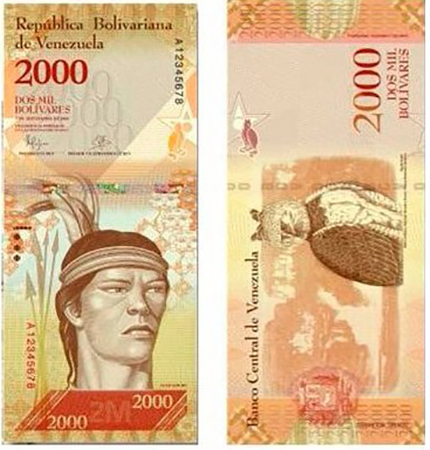 2016-series 2,000 Bolivares—Obverse: a portrait of Cacique (“Indian Chief”) Guaicaipuro. Reverse: a scene featuring the harpy eagle, one of the largest species in the Americas. Design last seen on the 2008-series 10 Bolivar note. 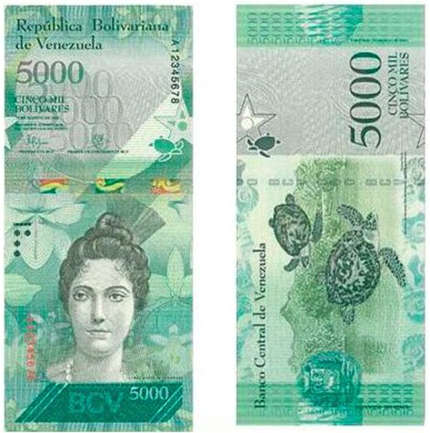 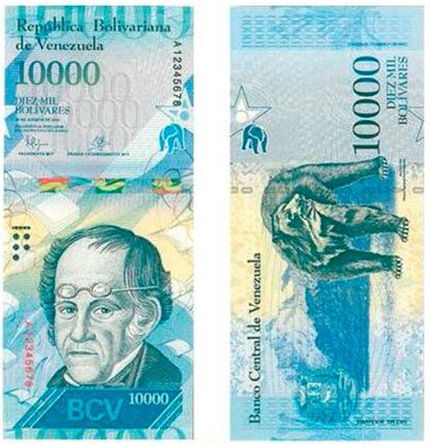 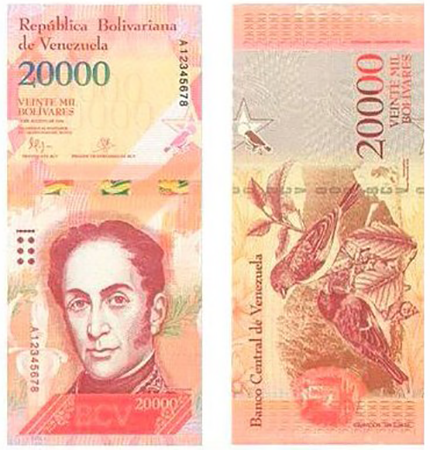