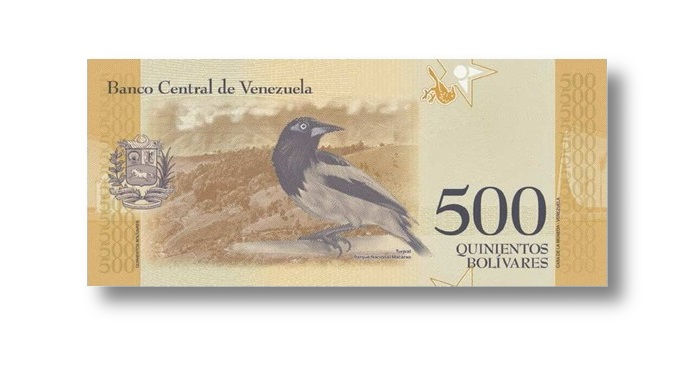 The Banco Central de Venezuela has introduced (20th August) their new bolívar soberano (or sovereign bolívar) to the weary Venezuelan public, amid uneasy social and economic conditions. The currency was launched on what was announced as a national holiday for a people who have been coping with a staggeringly high rate of inflation, resulting in the real loss of value of their currency by the day. The new, or re-valued, currency was initially announced earlier this year but had been postponed due to the greater level of inflation which is presently affecting the country’s economy. When the re-valuation of the bolívar fuerte was announced, the Central Bank had proposed shedding three zeroes from the current banknotes — the largest denomination being 100,000 bolívares fuertes. As inflation and the black market in the currency’s exchange continued on an upward trend, the Central Bank postponed the revised currency’s introduction by three months and announced there would be five zeroes removed from the present system of money, thus, 100,000 bolívares fuertes would equate to one new bolívar soberano.

The eight new banknote values are uniform in size at 69 by 156 millimetres, vary in colour with different denominations, and depict similar historic personalities depicted on the face and back designs of indigenous animal life seen on both the 2008 and 2016 banknote series. They range in values from 2-500 bolívares soberanos, and aside from the similar themes and persons depicted, the banknotes also retain their vertical design concept, seen on the face. In addition to the banknotes, just two coins are also being introduced in values of one bolívar (100,000 bolívares fuertes) and 50 centavos (50,000 bolívares fuertes).

At the beginning of August, the country’s president Nicholas Maduro appeared on television and displayed the new banknotes while explaining their value is being guaranteed by transferring to the Central Bank one of the country’s largest oil reserve fields. This move, coupled with the creation of a cryptocurrency (the “petro”), is seen by the Maduro government as guaranteeing that the new bolívar soberano does not lose its stated value.

With the introduction of the bolívar soberano (new ISO code VES) the Central Bank has effectively recognised the black market’s exchange rate for the bolívar fuerte, which reached nearly six million units per U.S. dollar. By adopting a practical and official rate of what will amount to 60 bolívares soberanos to one US Dollar, the move is seen by most economists to be a more realistic exchange rate. This equation was calculated by the national executive, taking into consideration the value of the country’s new crypto-currency, the petro. The government has adopted this new mode of accounting which is based on the daily trade price of a barrel of oil, hovering at just under $60. As such, the exchange rate between the new bolívar soberano, equalling 3,600 per petro, comes to an exchange rate of 60 bolívares soberanos per U.S. dollar.

In conjunction with the introduction of the new currency, the government has also announced that all businesses with more than 10 employees must pay a monthly salary of 1,800 bolívares soberanos, or, U.S. $30. It is believed that this amount, coupled with subsidised prices for essential foods and household goods, will be sufficient to maintain a reasonable standard of living for Venezuelans.


For additional information about the new bolívar soberano, please visit the website of the Banco Central de Venezuela. 2018 series dos-bolívares: Josefa Camejo (1791–c.1870) is depicted on the obverse side. She is remembered as one of the heroes who fought with other women of the time for the independence of Venezuela. On the back is a yellow-headed parrot, next to a background landscape of Cayo Sal, located in the state of Falcón. 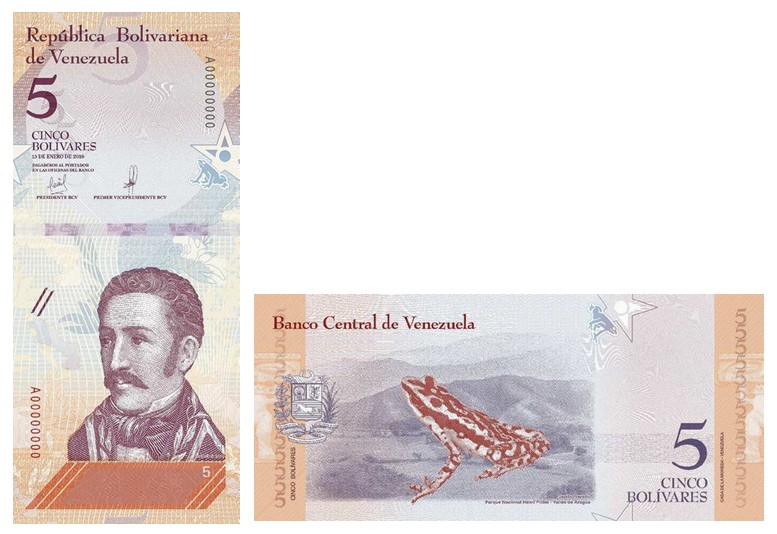 2018 series cinco-bolívares: José Felix Rivas (1775–1815). The face includes an image of the independence hero, José Felix Rivas. On the back is a striped toad accompanied by the background landscape of Henri Pittier National Park in the state of Aragua. 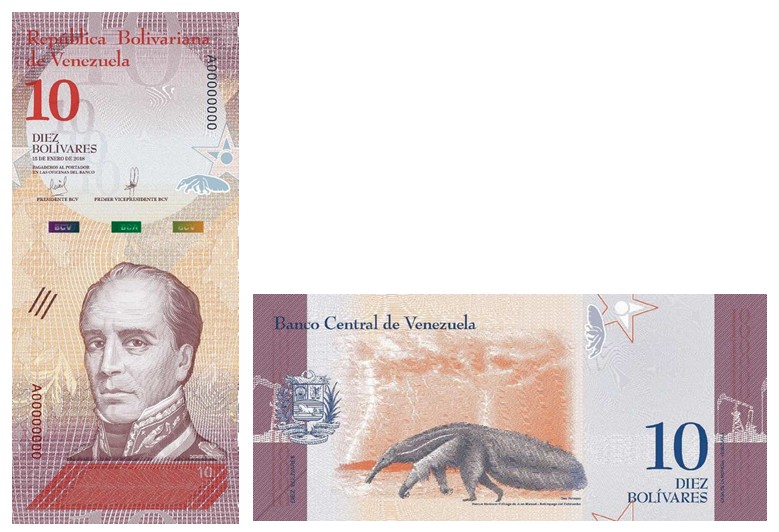 2018 series 10-bolívares: Rafael Urdaneta (1788–1845). The face shows a portrait of the hero of the independence movement of Venezuela, Rafael Urdaneta. Shown on the back is the Oso Palmero, accompanied by the landscape of the Ciénaga de Juan Manuel National Park. 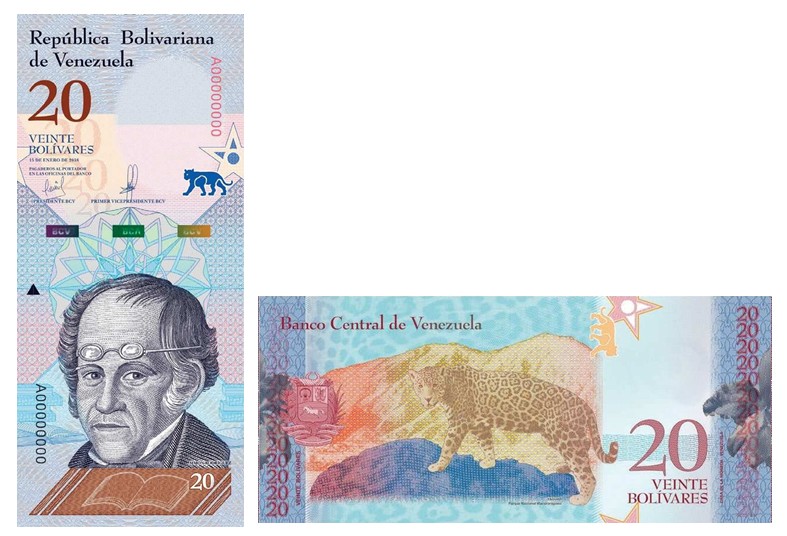 2018 series 20-bolívares: Simon Rodriguez (1769–1854). The face features a portrait of eminent educator Simón Rodríguez. The back shows the Venezuelan jaguar and the Waraira Repano National Park. 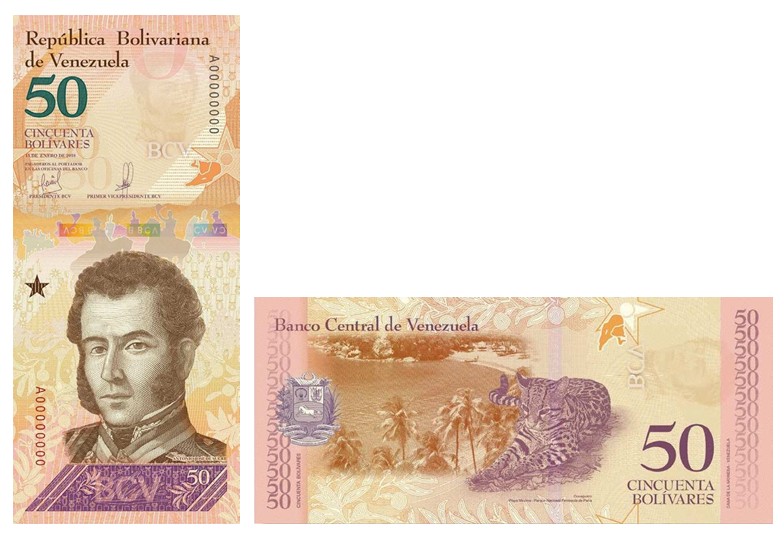 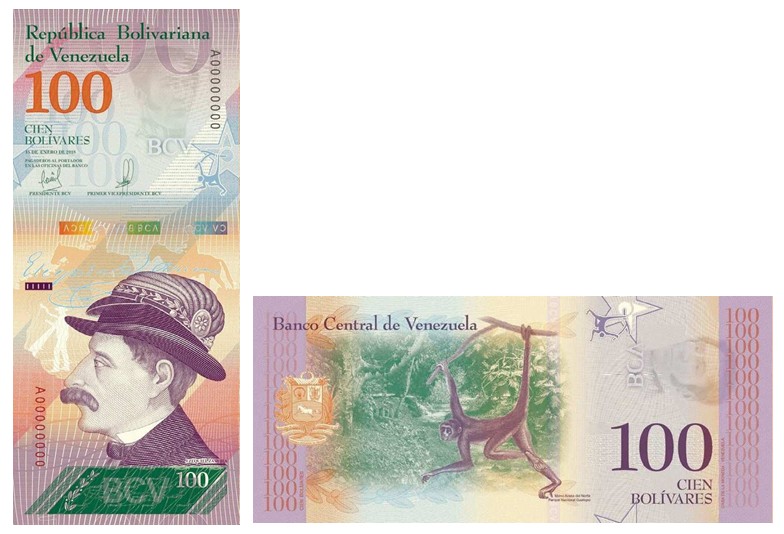 2018 series 100-bolívares: Ezequiel Zamora (1817–1860). Depicted on the face is General Ezequiel Zamora, a soldier of great repute in Venezuela. Shown on the back is the northern spider monkey and the Guatopo National Park. 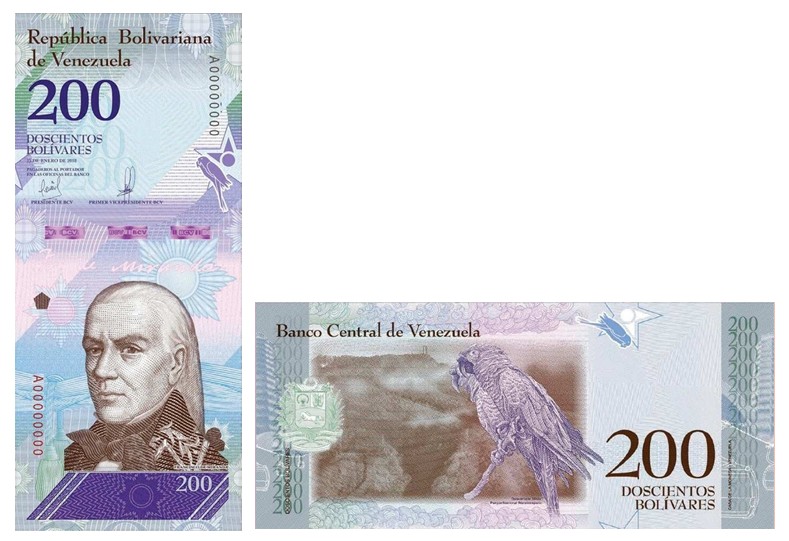 2018 series 200-bolívares: Francisco de Miranda (1750–1816). The face includes a portrait of Francisco de Miranda, a Venezuelan military leader and revolutionary. On the back is a green macaw and the landscape of the Waraira Repano National Park in Caracas. 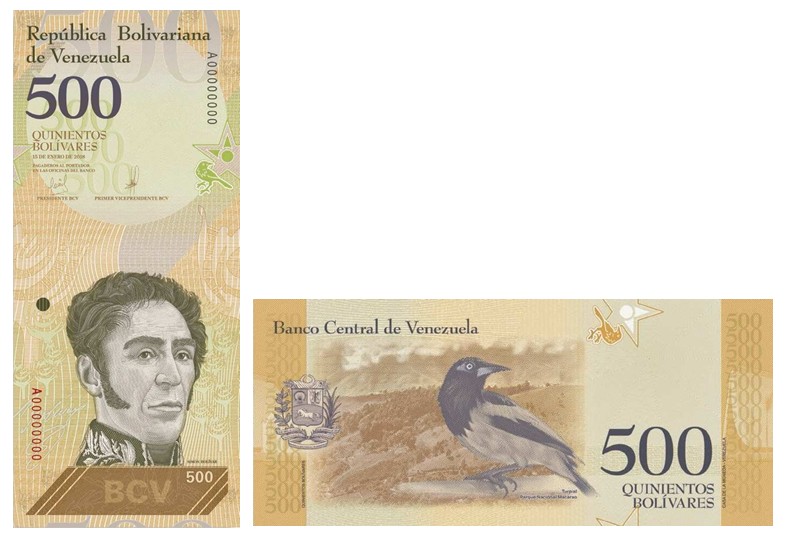 2018 series 500-bolívares: Simon Bolivar (1783–1830). Depicted on the highest denomination is the father and founder of the nation, Simón Bolívar. On the back is the turpial and the landscape of the Macarao National Park.