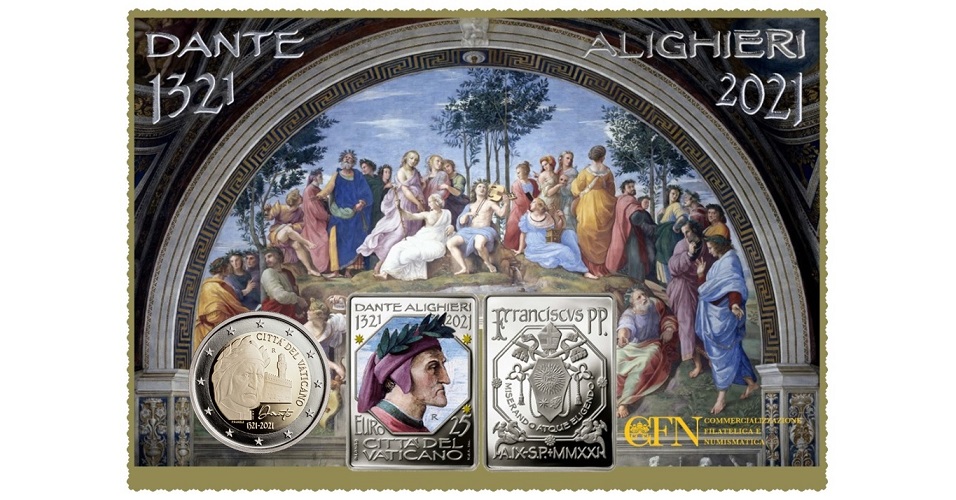 The Vatican City State Mint has released (28th October) new silver Proof and colour collector coins which mark the 700th anniversary of the death of the celebrated author Dante Alighieri, considered the greatest Italian poet. He is remembered as having made a significant contribution to the development of humanism with the use of the Italian vernacular in literature, challenging the hegemonic nature of the Church. His efforts helped transform and contribute to the cultural and intellectual changes known as the Renaissance, which altered the world forever.

Born in the year believed to have been 1265, though the exact date is unknown, and into a family with noble ancestry, whose fortunes had over time diminished. Dante’s family were involved in political intrigue at the time with their loyalty assigned to the Guelphs, a political alliance that supported the Papacy and in complex opposition to the Ghibellines, who were allied with the Holy Roman Emperor. It was this loyalty that would later cause his permanent exile from the city of his birth. In the year 1277, Dante became engaged to Gemma Donati but the two did not marry until eight years later. The couple became parents to six sons and a daughter.

Designed by Daniela Longo, the rectangular-shaped 25-euro coins are produced by the Istituto Poligrafico e Zecca dello Stato (IPZS) on behalf of the treasury department of the Vatican City State. The reverse side of the rectangular-shaped silver Proof and colour coins depicts Dante as he was portrayed in the Parnassus, a fresco painting by the Italian High Renaissance artist Raphael Sanzio in the Raphael Rooms, which are part of the Palace of the Vatican in Rome and begun in 1509 at the commission of Pope Julius II. The obverse side includes the crest of H.E. Pope Francis depicting the papal mitre and crossed keys. The legend FRANCISCUS PP is shown above the crest. The year of issue in Roman numerals, MMXXI, is placed below the crest along with the regnal year ANNO IX. The text MISERANDO ATQUE ELIGENDO, the Latin motto of His Eminence (“by having mercy, by choosing him”), is shown under the crest itself.

The two-euro coins, also produced by the IPZS, are designed by Patrizio Daniele, who also references the Parnassus fresco painting and creates a three-quarter facing image of Dante along with an image of the Bell Tower of the 14th century Palazzo Vecchio in Florence, his place of birth. Next to his image is a facsimile of his signature along with the years of his birth and death. The reverse side is that of the standard eurozone design for the two-euro coins, the numeral “2” superimposed over a map depicting Europe created by artist Luc Luycx.

Each silver Proof and colour rectangular coin is encapsulated and presented in a custom branded case to accommodate its shape. A certificate of authenticity is also included. The FDC version of the commemorative €2 coins is presented in a moiré-effect covered cardholder and accompanied by information about the coin. The Proof versions are encapsulated and presented in a custom case accompanied by a certificate of authenticity. For further information, please contact Customer Care at or visit the website of the Philatelic and Numismatic Office of the Vatican City State.