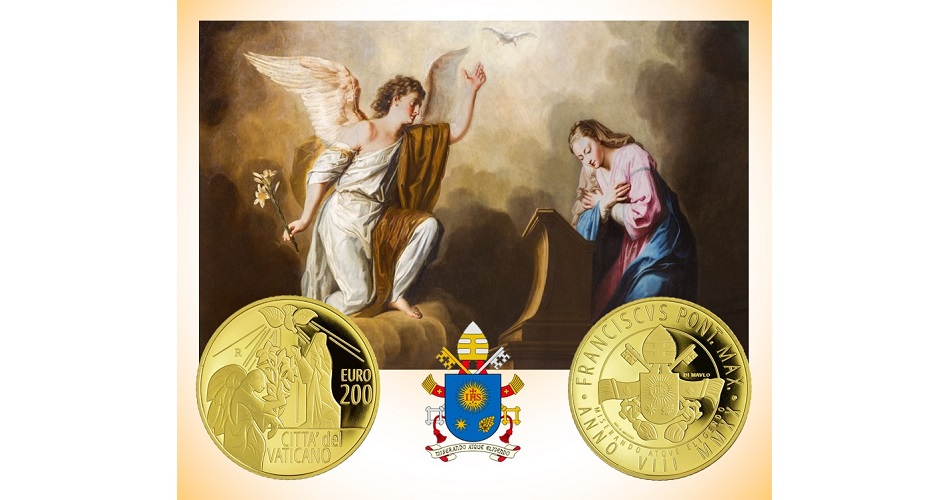 The Ufficio Filatelico e Numismatico Governatorato della Città del Vaticano — Holy See will issue (10th December) new gold coins which are part of the ongoing series entitled “The Archangels” and this year focuses on the archangel Gabriel. Launched last year, the series highlights three of the Christian tradition’s adoration of the archangels Michael (2019), Gabriel (2020), and Raphael (2021). According to Christian tradition, Gabriel is remembered above all for his role as a heavenly messenger and as such is therefore considered the patron saint of those who work in communications, postal carriers, ambassadors, newsagents, and couriers. He is often characterised as the bringer of good news and the angel of revelation, as well as the mediator between God and man.

The coins are produced by the Istituto Poligrafico e Zecca Dello Stato (IPZS) at their facilities in Rome on behalf of the treasury of the Holy See and are designed by artist Gabriele Di Maulo. To the right of the primary design is the denomination of 200 EURO and under the design is the issuing state of CITTA del VATICANO. The mintmark R is placed just to the upper left denoting the city of Rome.

The reverse side includes a depiction of the crest of His Holiness Pope Francis, which is superimposed over the keys depicting elements of a Sun radiant and includes the initials IHS or, Christogram of the Holy Name of Jesus. Also included is an eight-pointed star and Spikenard of muskroot. The legend FRANCISCVS PP. A. VIII MMXX (“Francis, pope and pontiff 8th year of reign, 2020”) is seen encircling the primary design with His Holiness’ motto in Latin MISERANDO ATQUE ELIGENDO (“by having mercy, by choosing him”) placed below the crest.

For additional information about these coins and other coins released by the treasury of the Vatican City State — Holy See — please visit the website of the Ufficio Filatelico e Numismatico Governatorato della Città del Vaticano.