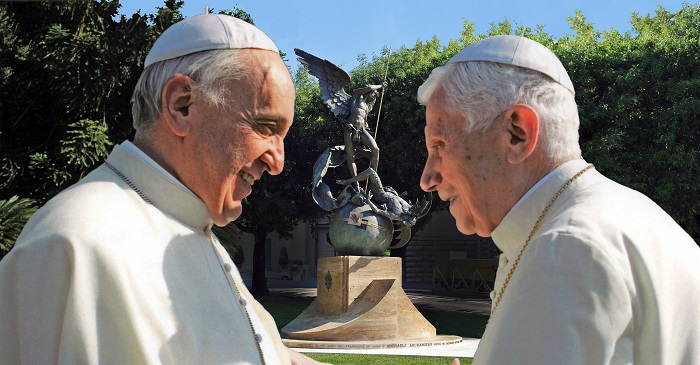 The Ufficio Filatelico e Numismatico Governatorato della Città del Vaticano — Holy See has announced (20th November) the issue of new gold coins which will launch the start of a three-year gold coin release dedicated to the archangels Michael, Gabriel and Raphael. Beginning with the year 2019, the Vatican Treasury inaugurates the first of the three, featuring the archangel Michael. The Holy Father recommends praying and entrusting those who look to the archangels to help in the fight against the downward temptation of life, to bring good news of salvation, and to take followers by the hand so as to not go astray on the path of life, thus cooperating in “God’s plan of salvation.”

The series starts with Michael (or the great Michael). Known in many Christian denominations as “Saint Michael the Archangel,” or simply as “Saint Michael,” he is mentioned in both the Hebrew Scriptures and the New Testament’s Book of Revelation. As the leader of the holy legion, Michael has a particularly devoted following. He became the patron saint of the Holy Roman Empire after the victorious battle of Lechfeld in 955. His Holiness has referred to the Archangel Michael as “the one who fights against the devil.” His primary Western liturgical feast day is celebrated on the 29th September and is referred to by many as “Michaelmas.” In the Eastern liturgical calendar, it is on the 8th November, when all archangels are honoured.

The coins are produced by the Istituto Poligrafico e Zecca Dello Stato (IPZS) at their facilities in Rome on behalf of the treasury of the Holy See and are designed by artist Mariangela Crisciotti. The reverse side reproduces a monumental statue located in the Vatican Gardens sculpted by artist Giuseppe Antonio Lomuscio. The statue was blessed by both Pope Emeritus Benedict XVI, under whose pontificate it was commissioned, and by Pope Francis, reigning at the time of its inauguration, which occurred on the 5th July 2013. On the base, it bears the coat of arms of both popes. The denomination of 200 EURO is placed to the left side and is arranged in horizontal and vertical directions. The obverse side includes elements of the personal crest of His Holiness Pope Francis along with his title in Latin and the year of issue in Roman numerals — MMXIX.

The coins’ official release date is the 3rd December 2019. Each coin is encapsulated and presented in a custom case accompanied by a certificate of authenticity. The next two coins in 2020 and 2011 will include designs for the archangels Gabriel and Raphael. For additional information about this coin and others offered from the treasury of the Holy See, please visit their website.