The Royal Dutch Mint has launched (20th March) a new set which combines some of the original key type coins issued after the signing of the Peace of Utrecht treaty – ending the decade long War of the Spanish succession and enabling the eventual union of the Dutch provinces into one Kingdom. Also included in this anniversary set is a contemporary replica of the commemorative medal, struck for the occasion of the declaration of the peace which was to shape the future of all the lowland provinces a century later as they united to form the United Kingdom of the Netherlands under the rule of the Prince of Orange who succeeded to the throne as William I, King and Grand duke of Luxembourg. 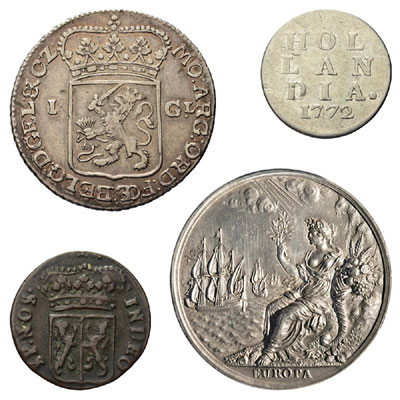 The coins included, all over two hundred years old represent some of the key numismatic issues during the era. A provincial silver gulden, with its ornate standing figure on the obverse and shield on the reverse, it is considered the precursor to the eventual and familiar modern gulden issued after unification after 1818. A dual-weapon penny (double Wapenstuiver) minted in silver, the coin was issued in several provinces with the city or authority inscribed on the reverse. A VOC penny (Vereenigde Oostindische Compagnie) or United East-India Company (defunct 1798) an entity established by the States-General of the Netherlands in 1602 in order to carry out trade and commerce in what was to become the Netherlands East Indies, or present-day Indonesia. 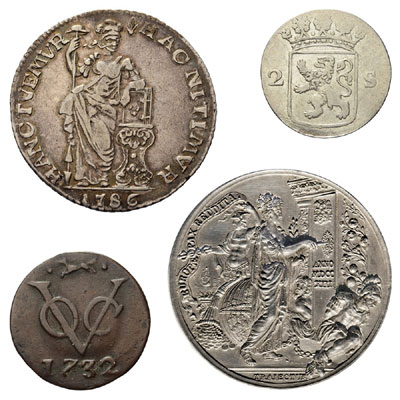 The medal included, is a reproduction of the original medal which was commissioned in honor of the treaty, this piece is now housed in the Royal Dutch Mint Museum. Struck during the Republic of the Seven United Provinces of the Netherlands, this impressive medal was designed by Johannes Drappentier Sr. and engraved by Johannes Drappentier Jr. in Dordrecht at the Provincial Mint of Holland. The obverse design depicts two standing allegorical figures at the temple of Janus along with the inscription “EUROPA PAX REDDITA” with the year 1713 represented in Roman numerals as MDCCXIII. The reverse depicts the seated figure of Europa and cornucopia in allegorical style along with tall mast merchant ships in the background and the word “EUROPA” to the lower portion. The reproduction is produced in pure silver to proof quality especially for inclusion in this collection.

All coins and the medal are each enclosed in perspex capsules and the collection is housed in a custom wooden presentation case along with booklet / certificate describing the coins included. The Royal Dutch Mint has advised that only 300 sets are available with the average grade of the coins being designated as Very fine.

For more information on this and other coins offered by the Royal Dutch Mint, please visit their website at: http://www.knm.nl/Provinciale-muntset-300-jaar-Vrede-van-Utrecht/nl/product/3451/?utm_source=TripolisDialogue&utm_medium=email&utm_term=&utm_content=nieuwsbriefalgemeentmg&utm_campaign=20130321_nieuwsbrief&opbrengst=100 The information is offered in Dutch – European destination orders fulfilled.