On May 27, 2010, the United States Mint began sales of the 2010 America the Beautiful Quarters Silver Proof Set. This set includes proof versions of the first five coins in the new series featuring National Parks and sites of America. The coins are struck in a composition of 90 percent silver. 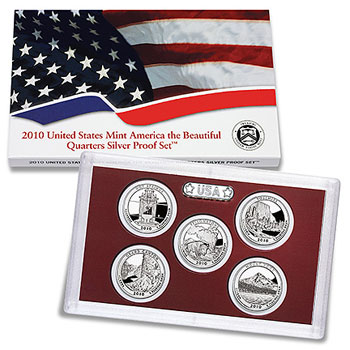 The five coins are placed in a protective plastic lens and packaged in an illustrated outer cardboard box. A certificate of authenticity signed by the Director of the United States Mint is also included.

The 2010 America the Beautiful Quarters Silver Proof Set set is priced at $32.95 plus a shipping and handling charge added to all orders. The sets can be ordered online at http://catalog.usmint.gov/

Earlier this month, the US Mint had released a separate proof set containing the five quarters struck in the standard clad compositions. As of the last available weekly sales report, the Mint sold 93,949 of the clad quarter proof sets.