The United States Mint has issued a consumer alert about the so-called “10th Anniversary September 11th Commemorative Dollar” marketed by a private firm called the National Collector’s Mint. These are not genuine United States coins or medals. 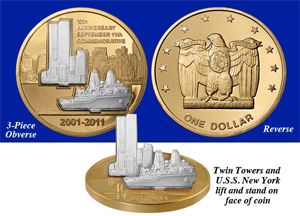 Advertisements for this product claim that it is a “Liberian government authorized legal tender coin.”

The US Mint warns:

Consumers may find the advertisements for this product confusing because the National Collector’s Mint uses phrases such as “legal tender dollar.”  The product itself may be confusing because it bears the denomination “One Dollar.”  Congress did not authorize the National Collector’s Mint product, and the United States Government does not endorse it.

Earlier this week, Senator Chuck Schumer and Congressman Jerrold Nadler called for Federal Trade Commission to crack down on the company “and send a loud message that profiteering off of a national tragedy will not be tolerated.”

The two had authored legislation signed into law in August, which will create an official 10th Anniversary September 11th Silver Medal. It will be produced by the United States Mint with surcharges distributed to the National September 11 Memorial & Museum at the World Trade Center.

The design of the official medals will be “emblematic of the courage, sacrifice, and strength of those individuals who perished in the terrorist attacks of September 11, 2001, the bravery of those who risked their lives to save others that day, and the endurance, resilience, and hope of those who survived.”

In response to a recent inquiry, the United States Mint indicated that final designs for the medal are in development. The medal is expected to be released close to the 10th anniversary date on September 11, 2011.