As part of this year’s March of Dimes Commemorative Coin Program, the United States Mint will be offering a limited edition collector set which includes specially produced Roosevelt Dimes. 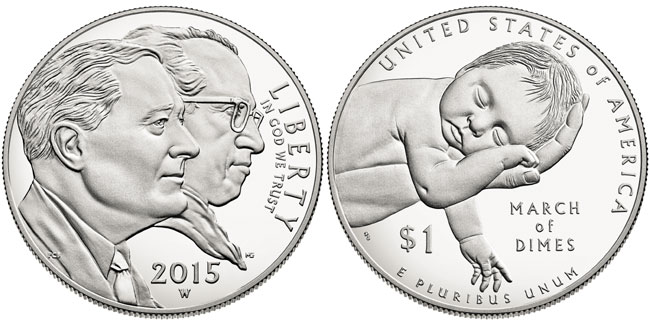 The program was authorized under Public Law 112-209 to recognize and celebrate the 75th anniversary of the March of Dimes Foundation. Silver dollars with an overall maximum mintage of 500,000 pieces will be issued in proof and uncirculated qualities. The obverse design of the coin contains profile portraits of Franklin D. Roosevelt and Dr. Jonas Salk and the reverse design depicts a baby cuddled in the hand of a parent.

The individual proof and uncirculated versions of the coin are currently scheduled for release on March 13, 2015. 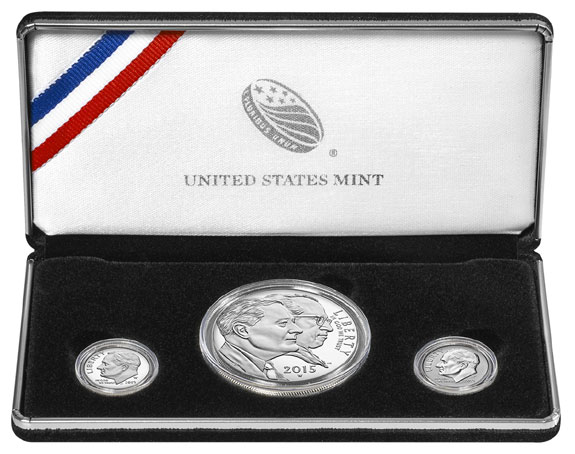 The coins will be packaged in a plush black clam shell case with silver trim and black cardboard outer box and sleeve. A certificate of authenticity with information about the March of Dimes will also be included.

The sets will be priced at $61.95 each. A product limit of 75,000 has been established and an ordering limit of 5 sets per household will be imposed.

This is the first time that the United States Mint has produced a silver dime at the West Point Mint and the first time the reverse proof finish has been used on the dime. These two dimes will only be available within the 2015 set.