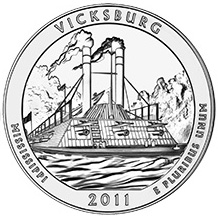 Following the recent rise in the market price of silver, the United States Mint has suspended sales for numerous silver numismatic products. The products include the five different America the Beautiful Five Ounce Silver Uncirculated Coins and the 2011-W Uncirculated Silver Eagle.

The suspended products are presumably in the process of having their prices adjusted to higher levels. Under typical procedures, the US Mint publishes new pricing within the Federal Register. Until the notification is published, product sales remain suspended.

During the past year, prices for these products types have already been adjusted on two occasions. The America the Beautiful Five Ounce Silver Coins were initially priced at $279.95. The price was reduced to $224.95 on October 7 and reduced again to $204.95 on December 27, 2011. Until the suspension, the US Mint was offering five different designs featuring Gettysburg National Military Park, Glacier National Park, Olympic National Park, Vicksburg National Military Park, and Chickasaw National Recreation Area.