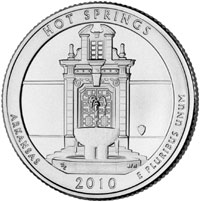 Based on updated coin production figures from the United States Mint, an additional 10 million Hot Springs National Park Quarters have recently been produced. This coin was the first issue of the America the Beautiful Quarters Program.

The Hot Springs Quarter was released into circulation on April 19, 2010, with a launch ceremony held on the following day.

For previous series featuring rotating designs, the United States Mint has generally concluded production of one design before beginning production of the next. For the America the Beautiful Quarters Program, the Mint has stated that production for any previous issue may be resumed within the year of issue to fulfill demand from their bulk purchase program. This program allows bulk bags of 200,000 coins ($50,000 face value) to be ordered directly from the Mint for face value plus a 3% handling fee.

The most recent production figures for the first four releases of the America the Beautiful Quarters series are shown below.

See also: Where Can I find National Park Quarters?